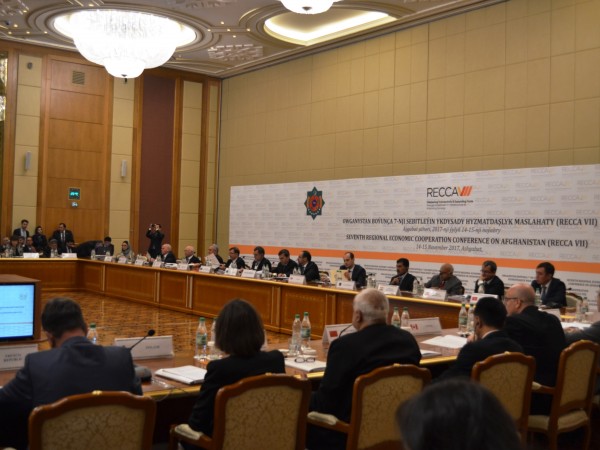 On November 15, 2017, the ministerial meeting of the 7th Conference of Regional Economic Cooperation for Afghanistan (RECCA VII) was held in Ashgabat, aimed at further consolidating the common efforts to develop mutually agreed approaches to resolving pressing issues of the Afghan problem, promote the peaceful revival and development of Afghanistan and, in general, promotion of economic integration on a regional and interregional scale.

Speaking for the settlement of the situation in the neighboring country exclusively by peaceful, political and diplomatic means, Turkmenistan is providing effective support in the socio-economic and cultural revival of Afghanistan. The Turkmen-Afghan political and economic dialogue can be called a model for successful interaction, which proves the possibility of building profitable and promising relations with Afghanistan. The joint work of the neighboring states allowed not only to stabilize the situation on most of the Afghan territory, but also becomes a real factor for the sustainable development of the entire region.

Particular importance was attached to the construction of the Turkmenistan-Afghanistan-Pakistan-India (TAPI) gas pipeline, which, in addition to direct supplies of Turkmen gas to Afghanistan, will create thousands of jobs in those provinces along which the pipeline will run and contribute to attracting additional funds to the country's budget.

It was also noted that, taking into account additional capacities built, Turkmenistan is ready not only to several times increase the volume of electricity supplies to Afghanistan, but also conducts practical work on the implementation of a new international project on the supply of Turkmen electricity under the project Turkmenistan-Uzbekistan-Tajikistan-Afghanistan-Pakistan (TUTAP).

As a result of the conference, the participants unanimously adopted the Ashgabat Declaration. According to the participants of the conference, the consistent implementation of the above projects, ensuring the economic integration of Afghanistan, will contribute to further strengthening and activating the socio-economic development of the states of the region, which is a guarantee of stability and security.

Thus, the holding of the current RECCA VII forum in Ashgabat is a logical continuation of the efforts of the Turkmen side in this direction, as well as another effective step towards strengthening and expanding the regional economic partnership.