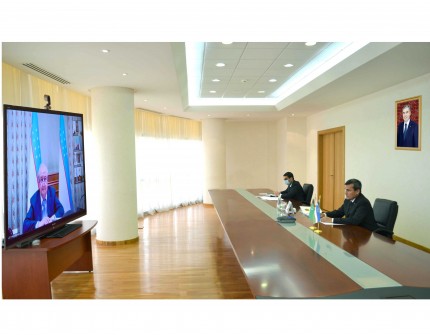 Today, on the 21st of September, the bilateral political consultations on the level of the Ministries of Foreign Affairs of Turkmenistan and the Republic of Uzbekistan were held in the format of a videoconference.

The parties exchanged views on a wide range of directions pertaining to Turkmen-Uzbek cooperation, discussed the current state of relations between the two states and made a number of proposals for its further development.

In this regard it was specifically stated that friendly, open and constructive political dialogue on the highest political level serves as the main factor in strengthening the relations of strategic partnership of Turkmenistan with the Republic of Uzbekistan.

The regular mutual visits, meetings and contacts of the Presidents of Turkmenistan and Uzbekistan constitute a firm foundation for the expansion of bilateral collaboration in political-diplomatic, trade-economic, cultural-humanitarian and other spheres.

Thereupon, the heads of external political agencies reiterated the high level of trust and mutual support of two countries on the international arena.

First of all, it is necessary to emphasize the highly respectful approach of Turkmenistan and Uzbekistan to those initiatives and proposals that are made by them in the framework of the United Nations.  As is known, the Uzbek side on many occasions has co-sponsored the Resolutions of the UN General Assembly initiated for consideration by the President of Turkmenistan in such vital fields as energy security, sustainable transport, ecology and on other pressing matters of the global agenda.  On its part, Turkmenistan actively participates to the advancement of internationally important        proposals of Uzbekistan and always supports the candidacy of the neighboring state at the elections in various UN agencies.

Highlighting the necessity of continuing effective cooperation on the multilateral platform, the parties expressed confidence in that during the current anniversary year, when the United Nations is celebrating its 75th anniversary and Turkmenistan is preparing to commemorate the 25th anniversary of its permanent neutrality, both states will significantly expand their collaboration within the UN, including amongst others the active participation in the implementation of new ideas declared by them as part of the priority positions at the General Assembly session that has started several days ago.

During the consultations, special attention was paid to the discussion of regional problems. In this regard, the Turkmen side reconfirmed its approach to the resolution of the Aral Sea problems and water-energy issues of the Central Asia.  At the same time, the main accent was made on the need to mutually respect on the side of the Central Asian countries of the positions of each other, taking into consideration their legal rights.  The example of such approach lays in the multiyear and constructive cooperation of Turkmenistan and Uzbekistan in the hydroeconomic sphere, on the issues of ecology and environment.  In particular, the initiatives of two countries were highlighted. That is the Turkmen initiative on the preparation of the UN Special Programme for the Aral Sea Basin and the Uzbek initiative on the establishment of the Multi-Partner Human Security Trust Fund for the Aral Sea Region. The parties presented the information on the practical implementation of these initiatives.

A special theme of discussion was the consideration of cooperation of two states on the topic of providing assistance to the neighboring Afghanistan.  It is commonly agreed that Turkmenistan and Uzbekistan take active part in the international efforts on the establishment of peace and civil consensus in the Islamic Republic of Afghanistan.  Both countries implement a number of major energy and infrastructural projects in participation of the Afghan side.  For example, Turkmenistan has substantially moved forward in the implementation of the TAPI gas pipeline project, as well as the laying of the power lines and fiber-optic communications on the route Turkmenistan-Afghanistan-Pakistan, construction of railways in the Afghan direction.

In addition to the political-diplomatic subjects, the parties discussed the issues of expanding bilateral economic partnership, the main vectors of which is the joint activities in gas, power industry, transport-communications, trade, agroindustry and other fields.  Today, the trade turnover between Turkmenistan and Uzbekistan has a consistent tendency to grow.  According solely to the results of 2019, its volumes has raised approximately by 80 percent.  So, with the aim of further improvement of trade-economic ties and resolution in this regard of a number of mutually beneficial issues, the parties agreed to prepare and hold in the autumn of current year, the successive session of the Joint Intergovernmental Commission on Trade-Economic, Scientific-Technical and Cultural Cooperation.

An important constituent of bilateral partnership is close collaboration of two countries in cultural-humanitarian field.  The fraternal people of Turkmenistan and Uzbekistan having joint culture, traditions and customs and based on the centuries long history of their relations, today develop this aspect by the means of regular meetings between the art and science workers, hosting of Days of Culture, exhibitions, concerts and festivals.  Both sides underlined the high significance of humanitarian contacts and their role in strengthening the ties of friendship and brotherhood.

In the end, the Ministers of Foreign Affairs expressed firm confidence in the need to hold systematically the bilateral political consultations, stressing their significance as an efficient tool of interstate collaboration between Turkmenistan and the Republic of Uzbekistan.