During his address at the 75th anniversary session of the United Nations General Assembly, the President of Turkmenistan proposed to unite the efforts of the countries with the aim of resolving the ecological crisis 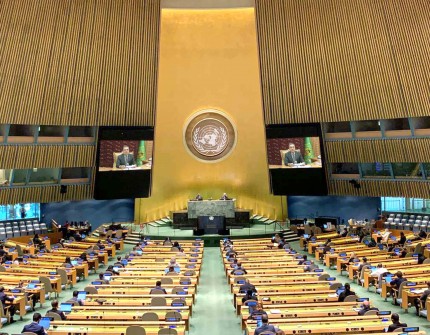 As is known, on the 22nd of September 2020, the high-level week of the 75th anniversary session of the United Nations General Assembly began in the UN Headquarters in New York. This is a unique platform aimed at the strengthening of dialogue between the countries and exchange views on resolving the challenging issues confronted by the humankind today. On the large screens of the conference hall of the UN headquarters, the transmission of the speech of the President of Turkmenistan Gurbanguly Berdimuhamedov took place among the first.

During his address, the head of Turkmenistan touched upon many key aspects of international agenda and called for the unification of efforts of the parties under the auspices of the UN. He specifically noted that there is a need to concentrate the attention of the world community on the ecological crisis in the Aral Sea basin which endangers the health of numerous people.

Speaking about the Aral catastrophe, the President said that against the background of pandemic situation, “the risks of severe spread of the epidemic have immensely risen.” Therefore, the head of state called the world community to special attention to the problems of the Aral and its surroundings.

As is known, Turkmenistan carries out comprehensive work in the given direction, among others by means of the International Fund for Saving the Aral Sea, which Turkmenistan has chaired last year. During its chairmanship, Turkmenistan jointly with the partner countries and international institutes made a valuable contribution to the functioning of the Fund. However, “in the process of  saving the Aral Sea, concrete practical assistance and support are needed for the people living there,” noted the head of state.

Accordingly, the President of Turkmenistan called for more detailed and comprehensive approach to this issue, highlighting the necessity of establishing corresponding legal arrangements and coordination of the UN.  In this regard, it was underlined that Turkmenistan initiated the establishment of UN Special Program for the Aral Sea Basin, and in 2018 and 2019, the UN General Assembly Resolutions “On cooperation between the United Nations and the International Fund for Saving the Aral Sea” were adopted upon the initiative of Turkmenistan.

It was specifically noted that in May 2021 Turkmenistan will present the initial draft of the concept and structure of future Special Program for the Aral Sea in the framework of ESCATO sessions as a tool of developing international legal foundations to address the Aral Sea problem. The President of Turkmenistan called upon all interested parties for active participation in this regard.