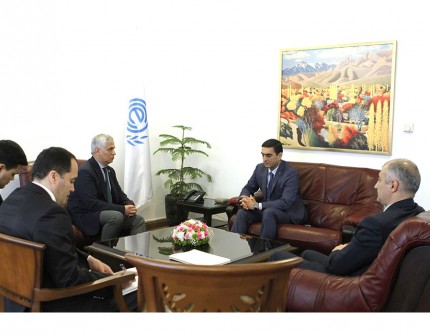 Within the framework of participation in the session on reforms and prospects for cooperation in the ECO region, the Deputy Minister of Foreign Affairs of Turkmenistan Vepa Hajiyev had a meeting with the ECO Secretary General Khusrav Noziri.

During the meeting, the parties exchanged views on a variety of issues concerning the current agenda of the Organization as well as the measures for implementation of the decisions taken during the 15th ECO Summit and 25th Meeting of the Council of Ministers held in November last year at Ashgabat.

The sides also considered the issues of the organization of some upcoming important events, including Ministerial meeting on transport of the landlocked countries, scheduled on August in Ashgabat. A special emphasis was given to the implementation of economic agenda of the Organization, focusing on further development of regional transport and communication network that is essential for an overall economic growth in the region.