President Serdar Berdimuhamedov met with Deputy Chairman of the Cabinet of Ministers, Minister of Presidential Affairs of the UAE 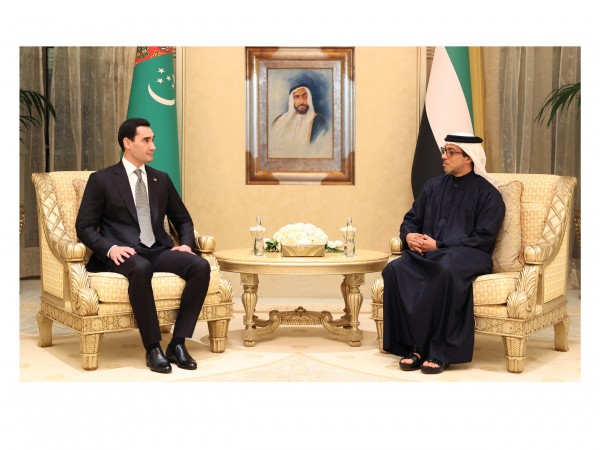 The head of Turkmenistan expressed his heartfelt gratitude for the warm welcome and conveyed greetings from the Chairman of the Halk Maslakhaty of the Milli Gengesh Gurbanguly Berdimuhamedov.

During the meeting, the importance of intensifying trade and economic ties was emphasized, issues of interaction in a number of promising areas were discussed, including in the fuel and energy sector, as well as in such areas as the oil refining, gas chemical industry and transport.

Sheikh Mansour Bin Zayed Al Nahyan confirmed the readiness of the UAE business community to expand a productive partnership with Turkmenistan, which is successfully implementing a far-sighted economic strategy.

The parties also noted the importance of building partnerships in the transport sector, in particular, in the field of maritime, rail and air traffic. In this context, the head of Turkmenistan stressed the relevance of establishing contacts with the International Port of Abu Dhabi in order to join the International Seaport of Turkmenbashi to the system of seaports of the world.

The interlocutors spoke for the importance of giving a new impetus to the activities of the Joint Committee on Cooperation between Turkmenistan and the United Arab Emirates, as well as for the expediency of holding regular meetings between representatives of the business circles of the two countries.

A proposal was also made to create a joint bank and open its representative office in both countries. President Serdar Berdimuhamedov supported this proposal, noting that Turkmenistan would create all opportunities for this.

Saying goodbye, President of Turkmenistan Serdar Berdimuhamedov and Deputy Chairman of the Cabinet of Ministers, Minister of Presidential Affairs of the United Arab Emirates Sheikh Mansour Bin Zayed Al Nahyan expressed confidence that the mutual desire to increase dialogue would be effectively implemented in practice for the benefit of the peoples of both countries.