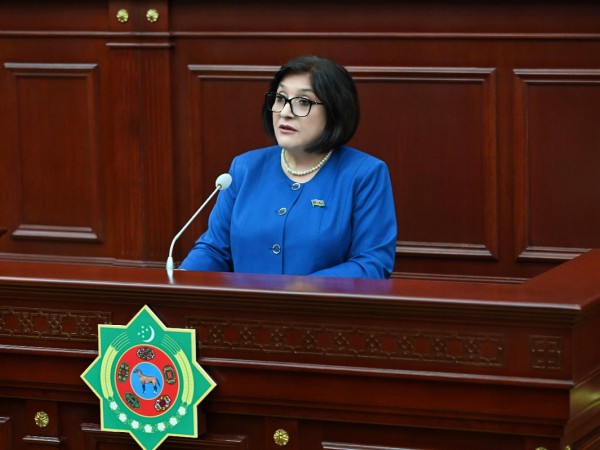 On December 7, 2022, a meeting was held in the Mejlis of the Milli Gengesh of Turkmenistan with the Azerbaijani parliamentary delegation, which arrived in our country on a visit, headed by the Chairman of the Milli Majlis of the Republic of Azerbaijan Sahiba Gafarova.

Warmly welcoming the Azerbaijani colleagues, the Chairman of the Mejlis of the Milli Gengesh of Turkmenistan G. Mammedova congratulated the guests on the International Day of Neutrality, emphasizing the importance of the current meeting, held on the eve of this wonderful holiday.

During the meeting, which was held with the participation of the heads of the committees, the state and prospects of inter-parliamentary cooperation, the possibilities of intensifying the exchange of experience in the field of lawmaking were discussed.

After the meeting in a narrow format, the Chairman of the Milli Majlis of the Republic of Azerbaijan addressed the deputies.

Giving the floor to the guest, Speaker of the Mejlis G. Mammedova acquainted the deputies with the biography of the head of the National Parliament of Azerbaijan, emphasizing that thanks to the active support of the Presidents of the two states, all conditions have been created for the development of inter-parliamentary cooperation.

Addressing the audience, S. Gafarova noted that her first visit to Ashgabat coincided with the 30th anniversary of the establishment of diplomatic relations between Turkmenistan and the Republic of Azerbaijan. The Speaker of the Parliament of a friendly country emphasized the commonality of our peoples, who have lived in the neighborhood for centuries and have a common history, culture, language, and religion.

As the Speaker of the National Parliament said, Azerbaijan fully supports the permanent neutrality of Turkmenistan, President Ilham Aliyev invariably emphasizes that fraternal Turkmenistan has achieved great success by following this principle in its foreign policy.

Touching upon the subject of further development of inter-parliamentary cooperation and the significance of the current visit to Ashgabat, S. Gafarova stated that today successful contacts have been established between various organizations of the two countries, including with legislative bodies.

At the end of her speech, Speaker of the Parliament of Azerbaijan S. Gafarova thanked the Chairman of the Mejlis of the Milli Gengesh G. Mammedova and all the participants of the meeting for their attention and hospitality.

On behalf of the deputies of the Mejlis of the Milli Gengesh, G. Mammedova expressed her gratitude to the guest for a meaningful speech, wishing the Speaker of the Parliament of the friendly country and Azerbaijani colleagues further success in their activities that meet the goals of common well-being and prosperity.