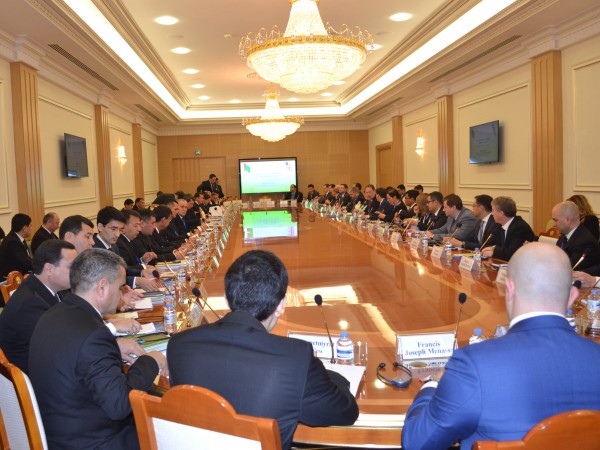 The meeting which was held in the building of the Chamber of Commerce and Industry of Turkmenistan was attended by the representatives of the key ministries and departments of Turkmenistan, production structures, banking and academic institutions, the Union of Industrialists and Entrepreneurs. To participate in the forum in Ashgabat US delegation has arrived, which included representatives from relevant US government agencies for business development, experts and businessmen representing such famous companies as «General Electric», «Microsoft», «John Deere», «Stewart Engineers», «IMS/Ellicot dredges», «Ionrex/Jar Capital».

In the first section, the discussion of issues of cooperation in the energy sector and in the field of transport have been heard reports of the representatives of the Ministry of Energy of Turkmenistan, the State National Service "Turkmenistan Airlines", the State Concern "Turkmengaz". On the American side the heads and representatives of «General Electric» and «Ionrex/Jar Capital» company took the floor.

State and prospects of application of modern technologies and the results of research in various fields of agriculture and the food industry have been the subject of discussions at the second section, where the vision of areas of cooperation shared by the representatives of the Ministry of Agriculture and Water Resources, National Food Industry Association of Turkmenistan, as well as specialists of such companies as «John Deere», «IMS/Ellicot dredges» and «CNH».

The third section was devoted to education, health care and communications. During this section the participants discussed practical issues such as the exchange of experience in the field of health care organization, preparation of highly qualified specialists, as well as exchange of students.

US businessmen have also held a series of meetings with representatives of the ministries and departments of Turkmenistan, including the fuel and energy sector, agriculture, in which special attention was paid to the implementation of high-tech joint projects aimed at the further expansion and deepening of mutually beneficial Turkmen-American cooperation.