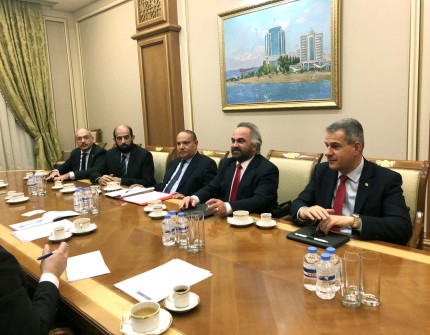 From 23 to 28 February 2019, the delegation of the company “Gulf Petrochemical Industries Company” (GPIC) of the Kingdom of Bahrain, headed by the Chairman of the Board of Directors Ahmed Al-Sharyan, is in Turkmenistan on a working visit.

During the visit, meetings with representatives of the State concerns “Turkmengaz”, “Turkmennebit”, as well as with executives for the oil and gas and chemical complexes were held.

During the meetings, the sides noted the importance of large quantities of architectural premieres in the oil and gas sector of Turkmenistan, such as the new automated railway trestle of the Kenar enterprise for the storage and shipment of oil products of the Turkmenbashi oil refineries complex, the polymer plant in the village of Kiyanly which was marked for innovation and environmental friendliness by the international certificates - the region’s largest gas-chemical complex for the production of polyethylene and polypropylene, Gas-chemical complex in Garabogaz marked by the international certificates as one of the best enterprises in the world.

Also during the productive negotiations, some joint oil and gas and gas chemical projects in Turkmenistan and the development of further areas of cooperation were discussed. The issue of creating a joint coordination working group was also discussed.