Ambassador of Turkmenistan visited the Republic of Adygea 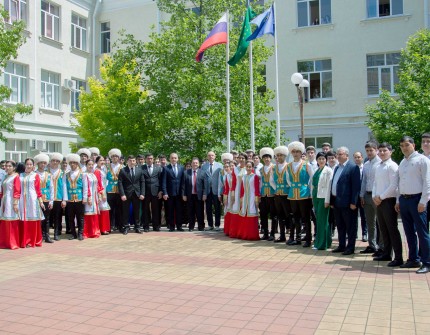 On May 17-18, 2019, the Ambassador Extraordinary and Plenipotentiary of Turkmenistan to the Russian Federation realized a working visit to the Republic of Adygea.  In the framework of the visit, the Ambassador of Turkmenistan held negotiations with the Head of Adygea Murat Kumpilov.  During the meeting, the issues of developing friendly and business relations, as well as cultural-humanitarian aspects were discussed.

The parties specifically noted the positive development of ties between Turkmenistan and the Republic of Adygea in social sphere, economy and humanitarian field.  In particular, the collaboration in the area of education was discussed.  Currently, hundreds of students from Turkmenistan study in the higher education institutions of Adygea.

After the meeting, the delegation of the Embassy of Turkmenistan in the Russian Federation attended the 10th anniversary tournament on mini-football among the Turkmen students, studying in the higher education institutions of Russia.  The winners of the competition on mini-football were awarded diplomas and memorable gifts on behalf of the Embassy of Turkmenistan in Russia.

After the tournament, a festive concert was organized with participation of the students from Turkmenistan.