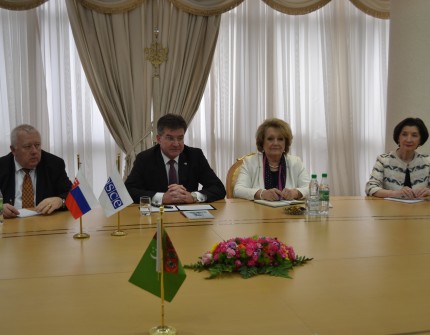 On the 21st of May, 2019, a meeting was held in the Ministry of Foreign of Turkmenistan with the delegation of the Organization for Security and Co-operation in Europe headed by the OSCE Chairperson-in-office and Minister of Foreign and European Affairs of the Slovak Republic Miroslav Lajčák.

During the meeting, the parties noted with satisfaction multiyear positive experience of cooperation between Turkmenistan and OSCE taking into consideration political-diplomatic, economic-ecological and humanitarian measures.  It was highlighted that in view of the realities of modern world, it is necessary to resolve the issues exclusively by the means of peaceful dialogue, primarily within reputable international organizations.  In this context, it was noted that Turkmenistan supports the initiatives of the Slovak Republic in the framework of international structures.

The parties also discussed the issues of security and stability in the region.  The high guest emphasized the vital efforts of Turkmenistan in the process of regulating the situation in Afghanistan, establishing civil peace in the country which is very important for the whole world community and particularly for the Slovak Republic.  It was noted that Turkmenistan is a significant strategic partner of the OSCE and EU.

Then, the parties considered the opportunities of perfecting economic and ecological collaboration.  The initiatives and projects of Turkmenistan in the sphere of transport development, energy security, preserving water resources and nature protection were noted.  Also the humanitarian issues were discussed.

In the first half of the day, the OSCE Chairperson-in-office and Minister of Foreign and European Affairs of the Slovak Republic Miroslav Lajčák was received by the President of Turkmenistan Gurbanguly Berdimuhamedov.

During the meeting, the parties spoke about the issues pertaining to bilateral cooperation between Turkmenistan and the Slovak Republic, as well as the constructive collaboration in the framework of the OSCE.  The firm approach of the Organization in the resolution of issues and challenges of modern days through constructive cooperation was noted.  The parties noted that Turkmenistan and OSCE will further closely cooperate in the process of sustaining peace and stability in the region and the world in general.