A meeting with a Malaysian delegation was held at Avaza 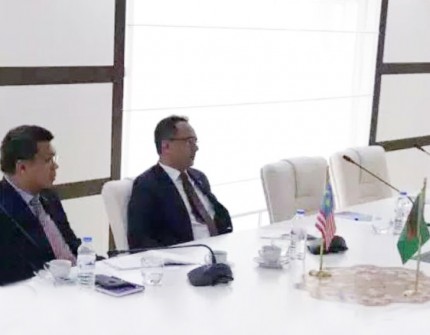 On July 30-31, 2019, a working visit of the Malaysian delegation of “Petronas” company to Turkmenistan took place. The delegation led by President and CEO Tan Sri Wan Zulkiflee Wan Ariffin held a series of meetings with the heads of relevant ministries in our country.

During the working visit, on July 31, the Malaysian delegation had a meeting with Advisor to the President of Turkmenistan on oil and gas issues Ya. Kakayev and Deputy Chairman of the Cabinet of Ministers, Minister of Foreign Affairs of Turkmenistan R. Meredov at the Deniz Hotel in Avaza National Tourist Zone.

During the meeting, the parties noted the fruitful nature of mutually beneficial cooperation in the fuel and energy sector and discussed issues of further expanding constructive business partnership.

As is known, Malaysian “Petronas” is the first foreign company that has begun the development of the Turkmen shelf of the Caspian Sea. Currently, the company is interested in partnership with the Turkmen side in the field of petrochemistry and other promising areas, which is implemented on the principles of trust and mutual benefit.

Highly appreciating the open investment policy conducted under the leadership of the President of Turkmenistan, the representatives of the Malaysian delegation expressed deep interest in intensifying ties and declared their readiness to take an active part in the implementation of large-scale projects.