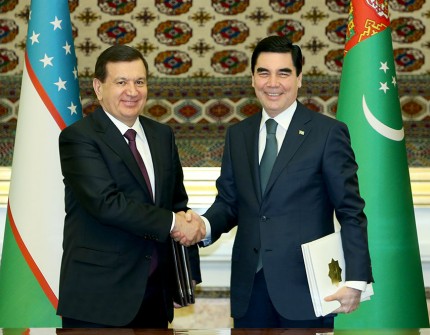 On March 6, 2017 the state visit of the President of the Republic of Uzbekistan to Turkmenistan started.

The two Presidents, Gurbanguly Berdimuhamedov and Shavkat Mirziyoyev, proceeded to Oguzhan Presidential Palace Complex in a car, accompanied by the cavalry escort of honor, for high-level bilateral talks. After the ceremony of official photography on the background of the State Flags, President Gurbanguly Berdimuhamedov invited President Shavkat Mirziyoyev to the Bilateral Meeting Hall of the Oguzkhan Presidential Palace Complex where Turkmen-Uzbek “one-to-one” negotiations had been held.

The Heads of two states discussed broad spectrum of issues related to current condition and prospects of Turkmen – Uzbek cooperation in its main directions under realization of the previous agreements, priorities of social and economic development of Turkmenistan and Uzbekistan and future plans. During the meeting, the Sides shared the visions on number of topical issues of regional and international politics presenting mutual interest.

After, the negotiations continued in the “Soltan Sanjar” hall in the extended format with the participation of the members of the official delegations of the two countries.

After the talks in the extended format the signing ceremony was held in “Seldjuk khan” hall. Following documents had been signed: the Agreement on economic cooperation for 2018-2020 years, a Memorandum on further development of cooperation in the field of rail transport, Inter-governmental co-operation program in the cultural and humanitarian sphere for 2017-2019 years, the Program of cooperation between the Ministries of Foreign Affairs of Turkmenistan and the Republic of Uzbekistan for 2017-2018 years. There were also agreements between the regions - Dashoguz province and Khorezm region, as well as the Lebap province and Bukhara regions on cooperation in trade-economic and cultural-humanitarian spheres. Contracts with enterprises and organizations of Uzbekistan concluded the Ministry of Railway Transport, the Ministry of Agriculture and Water Resources of Turkmenistan, the State Concern "Turkmenhimiya".

Presidents Gurbanguly Berdimuhamedov and Shavkat Mirziyoyev issued a Joint statement and signed the Treaty on strategic cooperation between Turkmenistan and Uzbekistan.

At the conclusion of the signing ceremony, the two leaders made an address to media representatives.

The Heads of State stressed that an important place in the talks was paid to the strengthening of peace, stability and security. It was noted that the parties agreed to work closely together in the bilateral format and within international organizations in addressing such pressing issues as combating international terrorism, extremism, transnational organized crime, illicit drug trafficking.
It was stated that Turkmenistan and Uzbekistan will continue to coordinate efforts on such an important direction of the global agenda as sustainable development and its component parts - the energy security, the development of international transport and transit traffic, ecology and environmental protection.

In the afternoon, the Leaders of the two states visited Akhal-Teke equestrian complex of the President of Turkmenistan, where President of Uzbekistan got acquainted with the conditions created for the keeping, breeding and training of Akhal-Teke horses. On behalf of the Turkmen people, a fine Akhal-Teke horse was presented as a gift to the brotherly Uzbek people, which became another vivid sign of the inviolability of the relations of friendship and good-neighborliness between the two countries.

The same day, President Shavkat Mirziyoyev laid a wreath at the Monument of Independence of Turkmenistan. By established tradition, the head of Uzbekistan planted on the Alley of the guests of honour located here, a young tree as a symbol of friendship between the two countries and peoples.

Also Uzbekistan leader left to Kipchak, where he paid tribute to the first President of Turkmenistan, laid flowers at the Mausoleum and visited the Mosque of Spirituality of Turkmenbashy.

In the evening President of Turkmenistan gave an official dinner in honour of President of the Republic of Uzbekistan, where the two leaders exchanged the speeches.

The state visit of the President of the Republic of Uzbekistan to Turkmenistan continues.