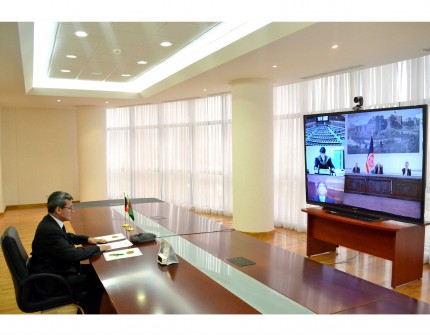 On November 23, 2020, a high level online meeting on regional cooperation was held within the Afghanistan Conference.  Turkmenistan was represented at the event by the Deputy Chairman of the Cabinet of Ministers, Minister of Foreign Affairs of Turkmenistan R. Meredov.

During the meeting that was attended by the heads of states and governments, as well as the international organizations, the President of the Islamic Republic of Afghanistan Mohammad Ashraf Ghani, the Secretary-General’s Special Representative for Afghanistan, Head of the United Nations Assistance Mission in Afghanistan (UNAMA) Deborah Lyons and many others gave speeches.

The participants discussed the issues of cooperation on establishing and maintaining durable peace in Afghanistan, including the socio-economic development of the country.

In his speech, the President of the Islamic Republic of Afghanistan Mohammad Ashraf Ghani noted the special importance of regional cooperation in the process of overall development of Afghanistan, as well as the prospects of the expansion of Asian contingent amid the large-scale economic projects.  He touched upon the issues of security and development of inclusive roadmap.  He underlined the key role of reestablishment of transport, communication and energy infrastructure through coordinated practical collaboration.  In particular, the Head of Afghanistan expressed gratitude to Turkmenistan who makes valuable input to the process of involvement of Afghanistan to the socio-economic development course.  The assistance of Turkmenistan to the implementation of the Lapis Lazuli corridor which is aimed at the contribution to the deserving life of the Afghan people was emphasized.

During her speech, the Secretary-General’s Special Representative for Afghanistan, Head of UNAMA Deborah Lyons noted the significance of support of the neighboring countries to the overall reinstatement of Afghanistan.  She underlined that one of the key elements in this process is infrastructure.   “Afghanistan and the region can draw immense benefits from the many power, energy, and road projects currently underway,” she said. The construction of the gas pipeline TAPI, power and fiber-optic communication lines on Turkmenistan-Afghanistan-Pakistan route, as well as the Lapis Lazuli corridor were especially noted.

During the meeting, the special role of international financial institutions in assisting the economic growth of Afghanistan was noted.  The leading economist on planning of the Asian Development Bank Safdar Parvez stated that owing to its geographic location, Afghanistan is in the center of important transport economic corridors crossing the region. He noted the importance of well-known Lapis Lazuli corridor linking Afghanistan with Turkmenistan and Turkey which contributes to its further integration.

The meeting was held in friendly and open setting.