Meeting with the delegation of Japan in Turkmenistan 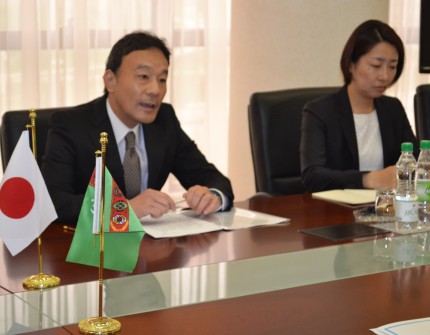 On April 11, 2017, the Minister of Foreign Affairs of Turkmenistan held a meeting with the Japanese delegation headed by Mr. Tamai Yuko, the head of the International Projects, Integrated Infrastructure and Water Management Division of the Industrial Production Department of the Ministry of Economy, Trade and Industry of Japan.

During the meeting, the sides noted the positive dynamics and strategic nature of bilateral relations. In addition, there was expressed mutual interest in intensifying cooperation between Turkmenistan and Japan in the political, trade-economic and cultural-humanitarian fields. In turn, the Turkmen side assured of a firm commitment to the implementation of agreements reached at a high level.

The sides noted mutual interest in further expansion of relations in various directions, among which, energy cooperation is one of the priority. The Japanese side conveyed to the Turkmen partners its vision and proposals for expanding cooperation in the gas industry, the issues of which were discussed during previous meetings. Noting the role of interaction within the framework of the "Central Asia + Japan" dialogue, the parties discussed the opportunities for intensifying regional cooperation with Japan.

During the talks, a great potential was noted for building up Turkmen-Japanese relations and the need for further support of regular contacts at various levels was stressed.