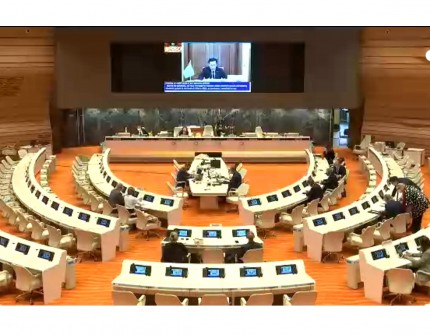 In the period from 20 to 21 April 2021, a meeting of the 69th session of the United Nations Economic Commission for Europe (UNECE) was held in Geneva. The event brought together representatives at the level of ministers and deputy ministers from UNECE member countries to exchange best practices in the field of circular economy and set its course over the next two years.

During the high-level segment on the topic "Encouraging the development of a circulating economy and sustainable use of natural resources in the region of the Economic Commission for Europe", the Minister of Finance and Economy of Turkmenistan M. Serdarov made a speech on behalf of the Turkmen side.

In his speech, Minister M. Serdarov noted that the transition to a circulating economy based on maximizing added value will be possible if control over reserves of natural resources is strengthened and a sustainable balance of renewable resources is observed to preserve and maintain natural capital at an inexhaustible level.

On April 21, 2021, in the afternoon, elections were held for the post of Chairperson and Vice-Chairpersons of the Commission from among the UNECE member states.

By unanimous decision, the following countries were elected as Chairperson and Vice-Chairpersons of the UNECE for the period 2021-2023: Chairman - Republic of Austria; Vice-Chairmen - Swiss Confederation and Turkmenistan.