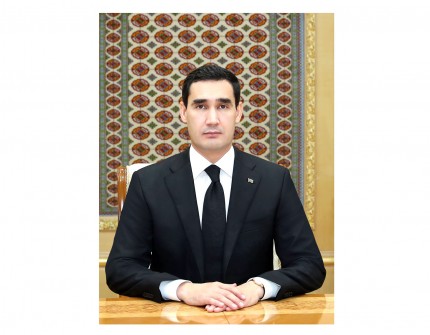 On September 26, 2022, President Serdar Berdimuhamedov received the Governor of the Chelyabinsk Region of the Russian Federation Alexei Teksler.

Expressing deep gratitude for the hospitality and cordial welcome extended on the Turkmen land, the head of the largest region of the friendly country warmly congratulated the head of state on the national holiday - the 31st anniversary of the independence of Turkmenistan, addressing the wishes of happiness, well-being and prosperity to the Turkmen people.

As A. Texler emphasized, he is very glad to visit Turkmenistan, with which the Chelyabinsk region has long-standing friendship and fruitful partnership, which is dynamically developing both in the field of economic projects and in the humanitarian sphere.

Thanking the guest for congratulations and kind words, President Serdar Berdimuhamedov noted that strengthening and further expanding the constructive dialogue with Russia is one of the priority areas of Turkmenistan's foreign policy. The head of state emphasized the special importance attached to the establishment of fruitful cooperation with large regions of the Russian Federation, including the Chelyabinsk region.

As noted, large-scale work is underway in Turkmenistan today to industrialize and diversify the economy, especially in the processing industries. In this context, President Serdar Berdimuhamedov emphasized the expediency of considering the possibility of expanding cooperation between the interested departments of the two countries in the design and construction of metallurgical and machine-building plants in Turkmenistan.

During the meeting, the existence of common goals in the field of expanding the range of goods in mutual turnover was noted. In this regard, it was emphasized that the Turkmen side is ready to supply products of the oil and gas industry, the textile industry, carpets, and agricultural products.

The subject of discussion was the further development of traditional humanitarian contacts. Particular emphasis was placed on the availability of wide opportunities for interaction in the cultural, scientific, sports and educational fields, as well as within the framework of social projects.

At the end of the meeting, the Governor of the Chelyabinsk region of the Russian Federation once again thanked the President of Turkmenistan for the hospitality and warm welcome.