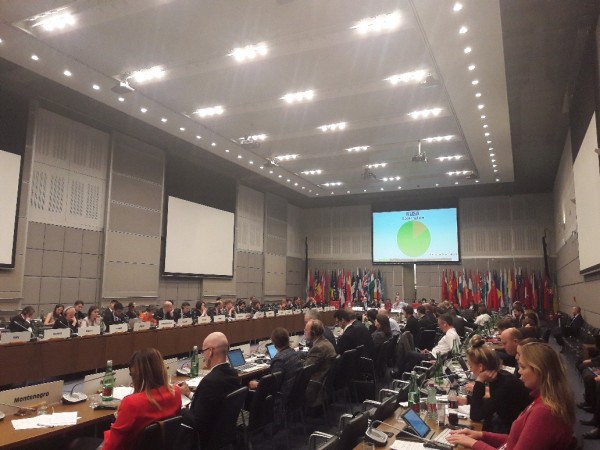 Offisial representatives of Turkmenistan during held regular meeting of the Permanent Council of the Organization for Security and Cooperation in Europe (OSCE) on 30th November, 2017 made a statement on the occasion of the International Day of Neutrality.

The statement noted that on 2nd February, 2017 during the 71st session of the UN General Assembly, a Resolution proclaiming December 12 as the International Day of Neutrality was adopted, which is celebrated for the first time this year.

The adoption of this resolution indicates the high prestige of neutral Turkmenistan on the world stage and the universal recognition of its contribution to global peace, security and sustainable development. This resolution was adopted at the initiative of the President of Turkmenistan Gurbanguly Berdimuhamedov, which was voiced during the International Conference in Ashgabat in December 2015, dedicated to the 20th anniversary of the permanently neutral status of Turkmenistan.

Further, the participants of the meeting were informed about the UN GA resolution "The role of the UN Regional Center for Preventive Diplomacy for Central Asia", initiated by the Government of Turkmenistan. The unanimous adoption of this resolution at the 55th plenary meeting of the 72nd session of the UN General Assembly as the basic document, as well as the fact that 57 states acted as co-sponsors of the resolution, was another evidence of the recognition by the world community of the peaceful policy of Turkmenistan.

In this context, it was stated that the UN Regional Center for Preventive Diplomacy for Central Asia, which was inaugurated in Ashgabat in December 2007, promotes the peaceful resolution of all emerging issues in the region, as well as the strengthening of cooperation between countries. The opening of this Center with the support of all the states of the region once again confirmed the unity of the course of the world community for creating conditions for cooperation of the countries of Central Asia with the UN and other international organizations.