Press conference was held at the Embassy of Turkmenistan in Ankara 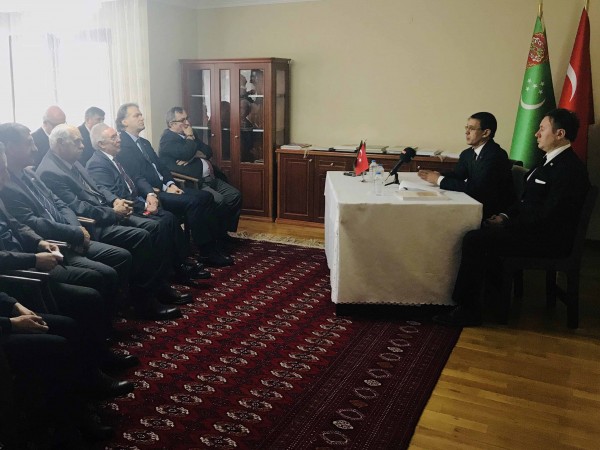 On January 19, 2018, a press conference was held in the building of the Embassy of Turkmenistan in the Republic of Turkey dedicated to the year "Turkmenistan is the heart of the Great Silk Road" and Turkmenistan's achievements in transport diplomacy.

The press conference was attended by representatives of the media of the Republic of Turkey, the friendship society “Turkmenistan-Turkey” as well as the lecturers and professors of some higher educational institutions of the country.

During the conference it was noted that the ancient Great Silk Road passed through the current Turkmen lands and in order to show this historic path of the Turkmen people to the world community, the year 2018 was declared by the President of Turkmenistan as the Year of "Turkmenistan is the heart of the Great Silk Road".

With this purpose, it was told about the work in progress and about the events in our country. In particular, the participants were informed of the success of the transport diplomacy of our country. It was stressed that the resolution adopted on December 20, 2017 by the UN General Assembly "Strengthening the links between all modes of transport in order to achieve sustainable development goals" is of great importance not only for our country or region, but for the whole world.

Also, information was provided on major international events planned this year in our country. Speaking about this, it was noted that in February 2018 solemn events will be held on the occasion of the launch of the next stage of the Turkmenistan-Afghanistan-Pakistan-India (TAPI) gas pipeline, fiber optic networks in this direction, the laying of the Turkmenistan-Afghanistan-Pakistan power line and the opening of the new railroad along the route Serhetabat-Turgundi.

At the end of the press conference, participants and guests were offered Turkmen national dishes.