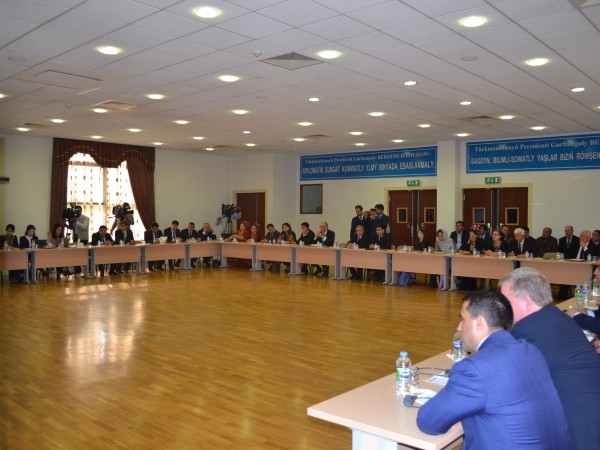 On October 13, 2017, at the Institute for International Relations of the Ministry of Foreign Affairs of Turkmenistan took part the Academic Forum held within the framework of the VII Ministerial Conference on Regional Economic Cooperation for Afghanistan (RECCA).

Representatives of relevant ministries and departments, employees of the diplomatic service of Turkmenistan, as well as heads of higher educational institutions of Turkmenistan and the Islamic Republic of Afghanistan, Director of International Studies of the Chongyang Institute for Financial Studies of the University of Renmin of the People's Republic of China, Professor of the Allameh Tabatab’I University of (ATU) of the Islamic Republic of Iran, Research officer of the National Institute for Strategic Studies of Kyrgyz Republic, Professor of National Defense University of Pakistan, representatives of the Just Security 2020 Program at the Stimson Center, the Institute of the Eastern West of the United States of America.

During the forum, speaking about major economic projects, particularly in the field of energy and transport, participants noted that at the current stage of development of global geopolitical processes, the mechanism of regional cooperation is becoming more relevant not only as an instrument for expanding economic interaction, but also as an important factor in efforts to strengthen stability and security. Taking an active position on issues of bilateral and multilateral cooperation on further integration of Afghanistan into the system of international economic relations as a full member, Turkmenistan initiates and implements major infrastructure projects. In this context, the role of the TAPI gas pipeline construction project was noted. Speaking about the transport infrastructure, the role of Atamyrat-Ymamnazar-Akina railway was noted.

Then the work of the forum was continued in the format of separate sessions, during which experts from various agencies discussed the strengthening of regional cooperation in the field of energy, the evaluation of regional and interregional links and infrastructure, the prospects and potential of regional facilitation of trade, transit and communication procedures, exploring ways of economic cooperation and integration in the region with an emphasis on the role of Afghanistan.