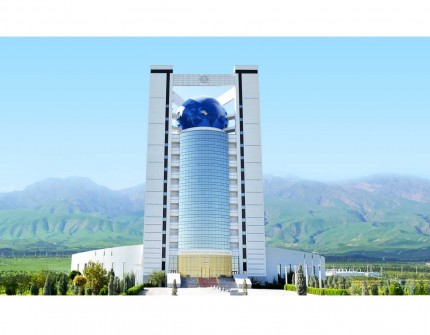 In connection with the ongoing new type coronavirus pandemic and the comprehensive measures adopted on the part of the international community on counteraction against this global threat, the Ministry of Foreign Affairs of Turkmenistan informs about the following.

The systematic work on preventing the entry of this infection on the territory of the country was implemented by Turkmenistan since the first days of the spread of the COVID-19 in the world.

In this regard, a Governmental Commission was established under the leadership of the President of Turkmenistan that is authorized to resolve organizational, legal, financial, technical and other issues related to the counteraction against the coronavirus. To coordinate the activities of the relevant state agencies, an Operational Center has been created which consists of the representatives of the Ministry of Healthcare and Medical Industry, Ministry of Foreign Affairs, Ministry of Internal Affairs, State Border Service, State Customs Services, State Migration Service and others.

At the first stage of combatting the coronavirus infection, a set of measures on strengthening borderline, customs and migration regulations, as well as the sanitary-epidemiological, phytosanitary and veterinary supervision was adopted.

The system of regular provision of the population with the necessary, free of charge medications contributing to the strengthening of immune system of a human being was arranged.

The clinical examination programme for the population is being carried out and the necessary measures on enhancing the immune status of the people are implemented.

At the same time, Turkmenistan is developing international cooperation aimed at the consolidation of efforts of the world community on combatting the pandemic threat.

Hereby, it is worthwhile to note the active participation of the President of Turkmenistan in the international Summits organized with the aim of counteracting against the pandemic.

Particularly during the Non-Aligned Movement Summit held in May 2020, the President of Turkmenistan set forward the initiative on promoting the scientific diplomacy by proposing the establishment of International Council of Medical Scientists.

The main content of this initiative lies in the establishment of direct contacts between the practicing doctors, scientists in the field of medical science on the following:

firstly, it is proposed to cooperate actively in the area of determining the nature of appearance of the new type coronavirus,

secondly, it is advisable to intensify the work of the scientific medical community in the field of studying the form of onset of the diseases evolved from the new type infection;

thirdly, the need for joint work is highlighted in terms of the search for forms, methods and means of treatment of the acute infectious diseases and their prevention, including the development of vaccines, other special medical substances and many more.

The information on the set of measures carried out by our country and outlined in the letter of the President of Turkmenistan addressed to the Director-General of the World Health Organization stand as one of the significant examples of Turkmenistan’s input in the international efforts on combatting the spread of COVID-19 infection. This letter was distributed as the official document of the 74th session of the United Nations General Assembly.

At the same time, on May 28, 2020, the International Forum dedicated to the issues of sustainable development and initiated by Turkmenistan was held. The resulting document of the Forum was also published as the official document of the 74th session of the UN General Assembly.

In line with the above said, it is pertinent to underline the call of the UN Secretary-General António Guterres to the Organization’s member-states made on March 30, 2020 on organizing the comprehensive and systematic work on counteraction against the coronavirus threat.

Consequently, the National Preparedness and Response Plan of Turkmenistan for Acute Infectious Disease was adopted in Turkmenistan on the state level on May 22 of current year.

In addition, the Plan of Operational Socio-economic Activities in Turkmenistan on the counteraction against the coronavirus pandemic was affirmed on July 3 of ongoing year.

Currently, jointly with the United Nations’ agencies, Turkmenistan is starting to develop the third National Plan encompassing the humanitarian constituent of the preventive measures implemented by the country against the COVID-19 infection.

Today, the issues of pandemic are subject to professional researches, scientific studies and developments. The scientists of many countries are involved in this work and based on deep scientific analysis they already today attain significant results, having important practical implementation in the process of counteracting against the pandemic.

One of such occasions became the address of 239 scientists from 32 countries of the world with an open letter to the Director-General of the World Health Organization, published on July 4 of current year, which contains information on the results of scientific researches confirming the chances of the new type coronavirus spreading through tiny aerosol droplets retaining in the air for a long time.

Based on the researches of the medical scientific community of Turkmenistan, the Turkmen side supports the above mentioned scientific results.

In this regard, it is pertinent to note that the multiyear researches of the Turkmen doctors, ecologists, specialists in the field of hydrometeorology and other areas of science prove that the substances posing danger for the human health, including the viruses, can be transmitted through air flow in the sensitive ecological environment of Central Asia.

At the same time, air masses forming in the zone of ecological disaster evolved from the drying of the Aral Sea pose an explicit danger and have a severe negative impact on the nature, climate, and human health of those residing in the Aral Sea area and far beyond it.

The dust and salt storms transmitting severely harmful substances from the ground of the dried Aral Sea extend for thousands of kilometers and pose a real danger for the human health.

The position of Turkmenistan on the Aral problems is well known in the world today. During his speech at the Sustainable Development Summit “Rio+20” on June 22, 2012, the President of Turkmenistan underlined that the problem of the Aral Sea currently “reached far beyond the region and gained a truly global scope.”

That is why the establishment of the UN Special Programme for the Aral Sea basin was proposed.

With the aim of practical implementation of the given proposal by the world community in the person of the UN and upon the initiative of Turkmenistan, two Resolutions of the UN General Assembly on “Cooperation between the United Nations and the International Fund for Saving the Aral Sea” were adopted which created a firm basis for multilateral collaboration on the resolution of the Aral problems in the UN platform.

Expanding multilateral cooperation on the Aral course, the draft concept of the UN Special Programme for the Aral Sea was presented at the sixth Session of the Committee on Disaster Risk Reduction of the United Nations Economic and Social Commission for Asia and the Pacific (ESCAP) held in August 2019. Upon the results of consideration of the given document, the draft ESCAP resolution on the issues of further work on the mentioned Special Programme was prepared and is planned for consideration in the framework of the successive session of the Commission in May 2021.

Great attention to the resolution of the Aral Sea problems is also paid in the Regional Environmental Program for Sustainable Development in Central Asia developed in the framework of the chairmanship of Turkmenistan in the International Fund for Saving the Aral Sea during the period of 2017-2019 and approved by the resolution of the Interstate Commission on Sustainable Development of the IFAS in October of 2019 in the city of Nukus of the Republic of Uzbekistan.

Based on the above said, the Ministry of Foreign Affairs of Turkmenistan is underlining the preparedness of the Turkmen side to continuation of wide multifaceted cooperation on the regional and international level on the counteraction against the pandemic, including the issues of detailed studying the impacts of exogenous factors on the spread of coronavirus COVID-19.

With these aims, in the near future Turkmenistan is going to implement a set of further practical measures in the framework of implementation of the agreements attained with the international partners and aimed at strengthening of solidarity on the counteraction against the new type of infection.

Press service of the