Videoconference between the Ministers of Foreign Affairs of Turkmenistan and Ukraine 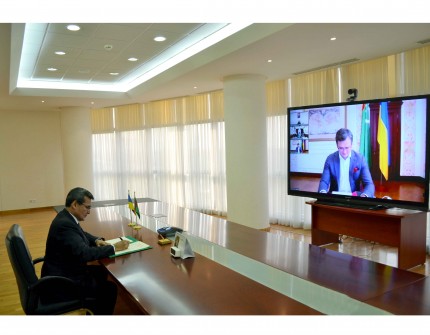 During the meeting, a constructive exchange of views regarding the bilateral agenda took place, as well as the level of political-diplomatic dialogue between the two countries was considered. The parties highlighted the importance of high-level contacts in the process of developing interstate ties. Also the necessity of enhancing the legal basis of bilateral cooperation was underlined.

Speaking about the regular meetings between the foreign policy agencies of the two countries, the Ministers noted closeness of standpoints on a number of issues of international agenda. The high level of collaboration in the framework of international entities, primarily the UN was stated. In this regard, the mutual support of pertinent initiatives aimed at maintenance of peace, attainment of sustainable development and economic growth was highlighted.

The parties also discussed the issues pertaining to trade-economic ties between Turkmenistan and Ukraine. The efficient work of Ukrainian companies in Turkmenistan, in particular in the field of construction and supply of railway equipment was underlined. The significant role of the Turkmen-Ukrainian Intergovernmental Commission on Economic, Cultural and Humanitarian Cooperation in the process of practical implementation of agreements between the corresponding organizations of two countries was highlighted.

The Ministers spoke about the intensification of cultural-humanitarian cooperation. The gratitude was expressed to the Ukrainian side for the assistance provided to the Turkmen students studying in the friendly country. The opportunities of organizing joint cultural events were regarded.

Upon the outcomes of the talks, the parties signed the Cooperation Programme between the Ministries of Foreign Affairs of the two countries for 2020-2021.