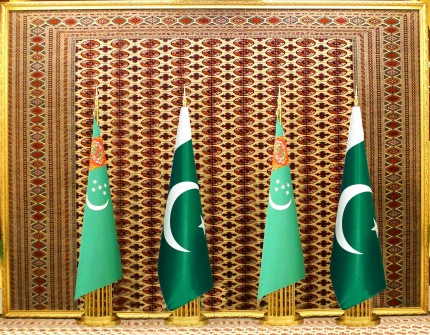 On September 18, 2020, a telephone conversation took place between President of Turkmenistan Gurbanguly Berdimuhamedov and President of the Islamic Republic of Pakistan Arif Alvi.

Expressing gratitude to President Arif Alvi for the great personal contribution and attention paid to strengthening bilateral cooperation, President Gurbanguly Berdimuhamedov noted that our states and peoples are bound by the traditions of friendship and cooperation.

During the telephone conversation, it was emphasized that in recent years, the friendly, trusting Turkmen-Pakistani dialogue has acquired a new content and is developing especially successfully due to the huge potential and mutual readiness of the parties to build up mutually beneficial ties.

Continuing the topic, the interlocutors noted with satisfaction the high level of cooperation in the political sphere, including within the framework of authoritative international organizations. In this regard, President Gurbanguly Berdimuhamedov addressed the Government of Pakistan with gratitude for the active support of Turkmenistan's initiatives in the world arena aimed at ensuring universal peace, security and sustainable development.

They also highlighted the progressive dynamics of interaction in the trade and economic sphere, where the strategic basis is partnership in the energy sector, in particular, on the implementation of the Turkmenistan-Afghanistan-Pakistan-India (TAPI) transnational gas pipeline project.

To date, construction and installation work on its Turkmen site is in its final stage. Most recently, a Memorandum of Understanding was signed between Turkmenistan and Afghanistan on the selection of land plots on the Afghan part of the TAPI highway, designed to facilitate the intensification of work on the territory of the neighboring country.

In this context, President Gurbanguly Berdimuhamedov expressed hope that with the assistance and support of his Pakistani counterpart, construction of a gas pipeline in Pakistan will soon begin.

As it was emphasized, the successful implementation of this major project, giving a new impetus to the economic development of the region, will further bind our states with the bonds of good-neighborliness and cooperation, and will become an important factor in peace and stability.

Among the promising areas of interstate and regional partnership, the effective combination of efforts to develop transport and communication infrastructure, and build power transmission lines was also identified. Today, Turkmenistan and Pakistan have sufficient potential for a significant increase in the indicators of bilateral trade, diversification of mutual supplies.

In this aspect, the expediency of conducting a thorough joint analysis of the general state of trade and economic relations and the dynamics of trade was noted. Here, the Intergovernmental Turkmen-Pakistani Commission should show itself more actively, President Gurbanguly Berdimuhamedov said, proposing to organize its next meeting in the online format in the near future.

The interlocutors also spoke in favor of expanding the traditional humanitarian interaction between the two countries, whose peoples are united by long-standing spiritual and cultural ties, which are now a solid basis for further deepening interstate cooperation. In this regard, there are good opportunities for enhancing systemic contacts in the field of culture and art, scientific, educational and medical spheres.

At the end of the conversation, confirming the mutual intention of Turkmenistan and the Islamic Republic of Pakistan to build up a constructive dialogue across its entire spectrum, Presidents Gurbanguly Berdimuhamedov and Arif Alvi wished each other health and success in responsible state activities, and well-being and prosperity to the fraternal peoples of both countries.