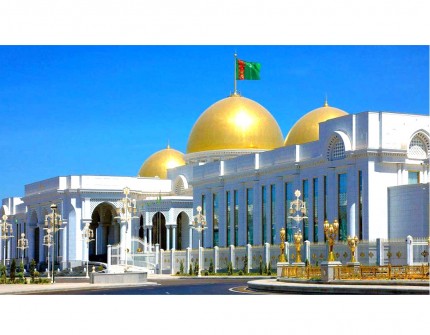 On May 20, 2022, President of Turkmenistan Serdar Berdimuhamedov received First Deputy Prime Minister of the Republic of Kazakhstan Roman Sklyar, who arrived in our country.

Thanking for the time devoted to the meeting and the opportunity to discuss certain issues of interstate cooperation in a personal conversation, the guest conveyed warm greetings from the President of Kazakhstan, Kassym-Jomart Tokayev, who addressed the head of Turkmenistan with the wishes of success in state activities aimed at sustainable development and prosperity of our country.

President Serdar Berdimuhamedov conveyed the best wishes of happiness and prosperity to the top leadership and people of the friendly country, with which independent Turkmenistan intends to continue to deepen traditional good-neighbourly relations both on a bilateral and multilateral basis, primarily through major international organizations and authoritative regional structures.

During the meeting, it was emphasized that our countries, which are celebrating the 30th anniversary of the establishment of diplomatic relations this year, have built exemplary interstate cooperation during this time. The interlocutors emphasized the need to intensify the constructive Turkmen-Kazakh dialogue in the political-diplomatic, trade-economic and cultural-humanitarian fields in connection with the great prospects for its further development, taking into account mutual interests.

At the end of the meeting, President Serdar Berdimuhamedov and First Deputy Prime Minister of the Republic of Kazakhstan Roman Sklyar exchanged good wishes, expressing firm confidence in the successful continuation of the age-old traditions of friendship and good neighborliness between the two states and their fraternal peoples.