A press conference was held in the Olympic town 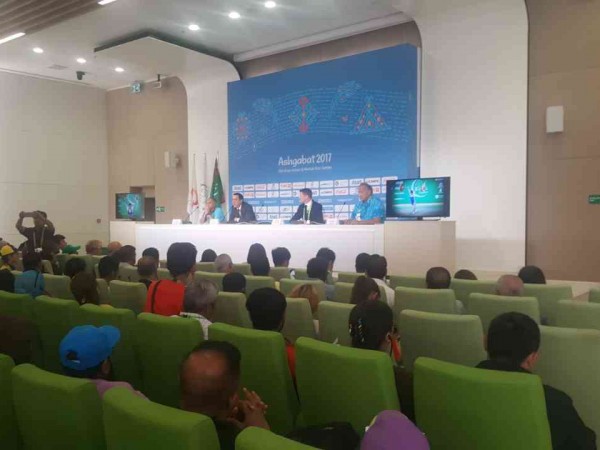 In the big hall of the Media Center of the Olympic town, a press conference was held with the participation of the representatives of foreign and domestic media, as well as the secretary of the National Olympic Committee of Turkmenistan A. Muradov, the administrator of the Olympic Committee of Oceania Ricardo Blas, the vice-president of the OCA Husain Al-Musallami and the general director of the company "Trivandi Chanzo" James Bulli.

The director of the British company "Trivandi Chanzo" James Bulli noted with satisfaction that working here for the preparation for the 5th Asian Games, the company employees felt themselves as the part of Turkmenistan and the Turkmen people.

Answering journalists’ questions about the prospects of Ashgabat as a sports center in the region, the officials holding the press conference paid special attention to the good conditions created for the athletes. In particular, as noted by James Bulli, everything is planned for the Asian Games 2017, everything has been done with great love for people - guests, sportsmen and everything is on top. In all this is felt the humanism of the Turkmen people. This suggests that Turkmenistan is guided by the lofty humanistic ideals of the Olympic movement.

The Olympic town is very convenient; all the necessary facilities are compactly located here. The popularity of the Olympic facilities of the Turkmen capital is growing in the world of sports, and in the future it will become the venue for the largest sports competitions more than once. For this there are all conditions.

Today the Games of the continent are successfully continuing in the Turkmen capital, the Games that warmly welcomed the envoys of Asia, Oceania and the team of refugees, who took part in the Asian Games for the first time. The competition is held at a high international level. Ashgabat will go down in history as the first city in Central Asia to host the 5th Asian Indoor and Martial Arts Games. There are great prospects for the country to become a major sports center.

The Administrator of the Olympic Committee of Oceania Ricardo Blas expressed gratitude to the National Olympic Committee of Turkmenistan for the invitation to take part in the Games and expressed the hope that in the future joint sports competitions will be organized with the participation of teams from the countries of Asia and Oceania.

Vice-President of the OCA Husayin Al-Musallami expressed sincere gratitude to the Turkmen side for the high level of organization of the Games. "All this is the result of tireless concern of the respected President of Turkmenistan Gurbanguly Berdimuhamedov to create a modern sports infrastructure and his great attention to the development of sports in the country," he said.