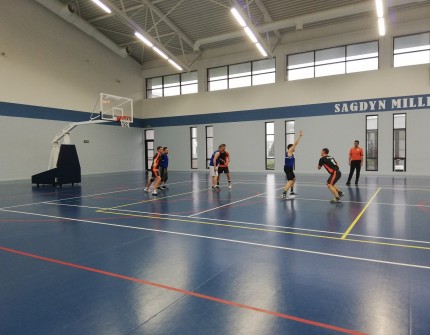 On February 15-16, 2020, sports events were held with the participation of the teams of diplomatic missions of foreign countries, representative offices of international organizations accredited in Ashgabat and the Ministry of Foreign Affairs of Turkmenistan, traditionally dedicated to the Day of Diplomats of Turkmenistan. This significant date was established by the Decree of the President of Turkmenistan in 2009.

This year, our country celebrates an anniversary date - the 25th anniversary of its neutral status, and therefore these competitions were held under the slogan "Turkmenistan – home of Neutrality."

The competition was organized in three sports: a 400 meters mass race, billiards and basketball in a 3 + 3 format.

A mass race took place on a treadmill around the football field of Turkmen State University named after Makhtumkuli. The children of diplomats were the first to enter the treadmill, followed by a woman’s 400 meter race and completed the men's tournament.

The winners of the above tournaments were awarded with diplomas of the Ministry of Sport and Youth Policy of Turkmenistan, as well as valuable prizes from the respective federations of the country.