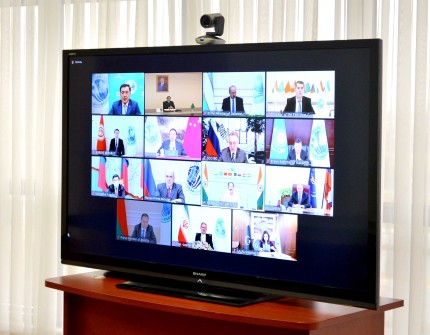 Among the key themes of discussion at the meeting of the Council of the Heads of Government (Prime Ministers) of the Shanghai Cooperation Organisation (SCO), held online on the 30th of November, was the trade-economic cooperation and transport interconnection taking account of the impacts of the global pandemic.

The participants of the session spoke for the necessity of expanding cooperation aimed at the attainment of open, inclusive, fair and multilateral trade system based on the principles and guidelines of the World Trade Organization (WTO) which is also expected to facilitate the development of open world economy.  The participants of the meeting appraised the current level of cooperation and exchanged views on the given theme.

The Deputy Chairman of the Cabinet of Ministers, Minister of Foreign Affairs of Turkmenistan Rashid Meredov also gave a speech at the meeting.  He noted the importance of involving the SCO potential in the expansion of the trade-economic ties and drew a parallel between the constructive tasks which Turkmenistan and SCO set for themselves.

In particular, the initiatives of Turkmenistan in the area of transport focused on the connection of main flows on South-North and East-West routes that have good prospects for the SCO countries and create additional opportunities for the diversification of Eurasian trade-economic ties and encourages interregional partnership were highlighted.

In this regard, the proposal was voiced on the development of joint projects, together with the use of multifunctional port infrastructure built on the coastline of Turkmenistan and the possibilities of Turkmen commercial port.

It was stated that the Turkmen side is open for multifaceted dialogue on this and other issues. The possibility of expanding the cooperation in the area of energy was highlighted, in particular through the unification of the potential of Turkmenistan and SCO on the implementation of large infrastructural projects and diversification of energy flows on the Eurasian space.  In this context, the strategic role of the construction of Turkmenistan-Afghanistan-Pakistan-India gas pipeline was stressed, which among other things is expected to have a favorable effect on the strengthening of regional stability, reestablishment of the economy of Afghanistan, its effective integration into the continental and world economic ties.  In this context, the importance of laying the power and fiber-optic communication lines on Turkmenistan-Afghanistan-Pakistan route was stated.

It is specified that Turkmenistan is ready to discuss with SCO the arrangement of mutually acceptable projects, including those in the area of energy, transport, high technologies and others.