Meeting with the US Special Representative for Afghanistan 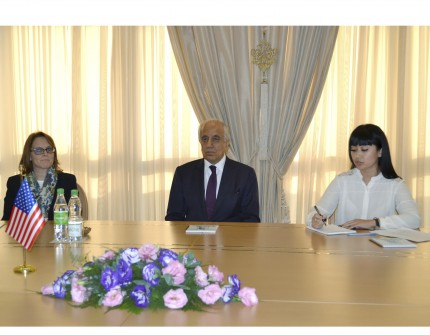 On December 11, 2018, the Minister of Foreign Affairs of Turkmenistan R. Meredov, held talks with the delegation of the United States of America led by the US Special Representative for Afghanistan, Zalmay Khalilzad.

During the meeting, noting the positive results of joint cooperation in enhancing bilateral relations between Turkmenistan and the United States of America, the sides expressed interest in their further diversification. After exchanging views on the development of the political situation around Afghanistan, the parties considered the possibilities of intensifying bilateral political and diplomatic cooperation. In particular, it was stated that Neutral Turkmenistan, being an active participant in international formats for Afghanistan, for a number of years regularly takes steps to establish peace in Afghanistan. In this context, special attention was paid to the initiative of President of Turkmenistan Gurbanguly Berdimuhamedov, about the readiness of our country to provide a political and diplomatic space to prepare for the establishment of a peace process in neighboring Afghanistan.

Waving the Afghan theme, Z. Khalilzad praised the infrastructure projects being implemented in Afghanistan and noted their importance in strengthening the security of neighboring Afghanistan and in the region as a whole. The implementation of the gas pipeline (TAPI), power lines and fiber-optic communications on the route Turkmenistan-Afghanistan-Pakistan (TAP), as well as the Serhektabat-Turgundi-Herat, Imamnazar-Akina-Andkhoy railways, are designed to seriously change the geopolitical map of the region.

Stressing the need for further progressive expansion of Turkmen-American cooperation, the sides discussed issues of its further expansion on a mutually beneficial basis.