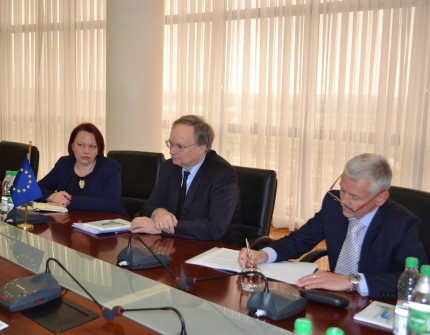 On March 4, 2019, a meeting was held at the Ministry of Foreign Affairs of Turkmenistan with the delegation of the European Union headed by Mr. Christian Berger, Head of the EU delegation in Turkmenistan (with residence in Ankara), who arrived in Turkmenistan on a working visit.

During the meeting, the sides noted a significant strengthening of bilateral relations between Turkmenistan and the European Union. Also, the heads of delegations stressed the positive development of cooperation of Turkmenistan with the European Union in the political, trade-economic and humanitarian spheres. Recently, inter-parliamentary ties have noticeably strengthened, the dialogue on security and human rights continues successfully.

Also, the technical assistance projects of EU are successfully implemented in the country, particularly the effectiveness of “ERASMUS MUNDUS” program was noted.

As is known, Turkmenistan attaches great importance to the development of relations with European countries. For many years, diplomatic missions of a number of European countries have been successfully operating in the country. At this meeting, the parties discussed issues related to the opening of the EU office in Turkmenistan in the near future.

The parties also reviewed the results of joint activities in 2018, and discussed the plan of activities for the current year. The heads of delegations expressed hope for continued constructive cooperation between Turkmenistan and the European Union.