The meeting of the Turkmen-Tajik intergovernmental commission 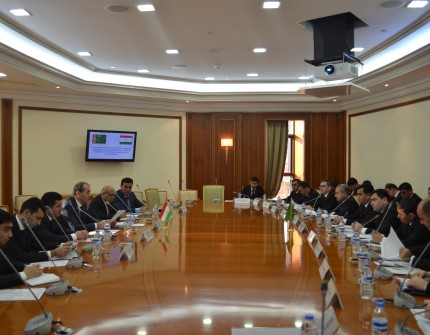 On 26-27 January, 2017, the regular seventh meeting of the joint Turkmen-Tajik Intergovernmental Commission on Trade-Economic and Scientific-Technical Cooperation had been held in Ashgabat. Tajik delegation was headed by Minister of Energy and Water Resources of Tajikistan Usmonali Usmonzoda.

The meeting was attended by the heads and leading specialists of the ministries and departments, representatives of business circles of the two countries. The issues of bilateral relations had been put on the agenda of the meeting.

The sides discussed the implementation of agreements reached during the sixth meeting of the Commission held on 28-29 April, 2015 in Dushanbe. The members of the commission held thorough exchange of views on the current state of the Turkmen-Tajik relations in the course of which the sides noted the positive dynamics of trade and economic, cultural and humanitarian cooperation between the two countries.

Among the priority areas the sides named trade and economic, fuel and energy sector, industry and power generation, agriculture and water management, health, education, science, sport and tourism. Particular attention was focused on the transport and communication sector.

During the work of the Commission the sides held bilateral meetings between representatives of the Tajik and Turkmen ministries, departments and companies.

At the end of the seventh meeting of the joint Turkmen-Tajik Intergovernmental Commission on Trade-Economic and Scientific-Technical Cooperation the parties signed the Protocol.