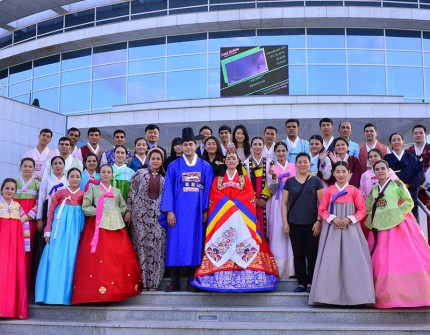 On September 3, 2019, the opening of the “Week of Korean Culture”, organized by the Ministry of Culture of our country together with the Embassy of the Republic of Korea in Turkmenistan, was held in the “Ashgabat” cinema hall.

At the opening ceremony of the week of culture, the relevance of cultural exchange, the popularization of spiritual values ​​and creative heritage in strengthening peace and friendship, mutual enrichment of cultures and mutual understanding of the two peoples, and the expansion of humanitarian dialogue were noted.

Then there was a show of traditional Korean clothing - hanbok. Its various types were demonstrated, including casual and magnificent wedding suits.

The Turkmen people got acquainted with the cinematography of a friendly country while watching the film “The Great Moment” (2008), which tells about the final handball match of the 2004 Summer Olympic Games in Athens, where the female team of the Republic of Korea took second place in an exciting duel.

Acquaintance with the sports culture of the Korean people continued at the Turkmen Music and Drama Theater named after Makhtumkuli. Demonstration performances of the Korean Taekwondo team resembled a colorful show, which was dominated by agility, strength and beauty of movements.

The program of the cultural action also included a presentation of traditional dishes of Korean cuisine, which was held at the Berkarar shopping center.

On the final day of the “Week of Korean Culture”, a seminar was held in the conference hall of the Yildiz Hotel on the key aspects of Turkmen-Korean relations.