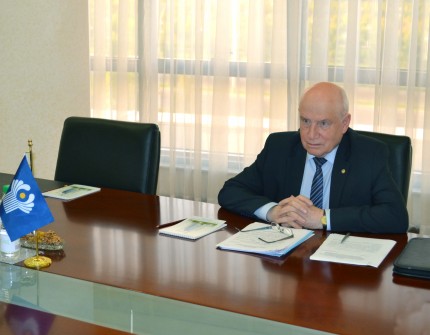 On the 11th of September 2019, Deputy Chairman of the Cabinet of Ministers, Minister of Foreign Affairs of Turkmenistan R.Meredov met with the Chairman of the CIS Executive Committee - Executive Secretary S.N. Lebedev who has arrived to Ashgabat to participate to the 83rd session of the Economic Council of the Commonwealth of Independent States that will take place on September 13 of the current year.

At the beginning of the meeting, S.Lebedev highly appraised the efforts of Turkmenistan in promoting the main objectives and tasks of the CIS in the framework of the chairmanship of the country in the Commonwealth in present year. The success of hosting the session of the CIS Heads of the Governments Council in May of the current year in Ashgabat which made a valuable contribution in the implementation of the agreements attained and strengthening of cooperation between the countries was noted.

Then the parties considered the themes of the upcoming session of the CIS Economic Council, the successful hosting of which is aimed to produce a pleasant effect on the cooperation between the CIS member states on the issues of mutual interest, particularly in the area of developing the economic and social policies.

Also the parties discussed the issues related to hosting the sessions of the CIS Heads of States Council and CIS Foreign Ministers’ Council planned for October of 2019.