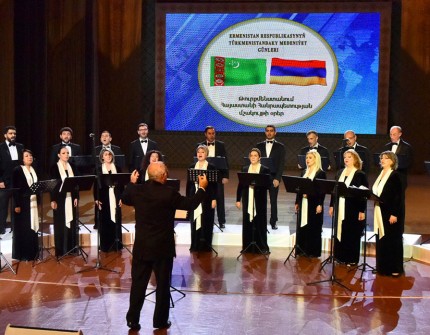 On November 5, 2019, the official opening ceremony of the Days of Culture of the Republic of Armenia was held at the Mukam Palace of the State Cultural Center, which brought together representatives of the creative intelligentsia, representatives of diplomatic missions accredited to Turkmenistan, the media, and youth.

The Deputy Ministers of Culture of both countries greeted the participants in the celebration, emphasizing the importance of the current event, and noted that the friendly relations that have developed can successfully build up a multifaceted partnership.

At the end of the solemn part, a concert of the Yerevan State Chamber Choir took place, the program of which included works from the treasury of Armenian and world musical classics.

In the morning, a meeting with members of the official delegation of the friendly country took place at the Ministry of Culture, during which the prospects of Turkmen-Armenian cooperation in the cultural and humanitarian sphere were discussed.

Within the framework of the Days of Culture, an exhibition of showpieces of the National Gallery of Armenia at the Museum of Fine Arts will also take place, and at the State Academy of Arts - a meeting with specialists of the Teryan Cultural Center, as well as screening of films by Armenian film makers.