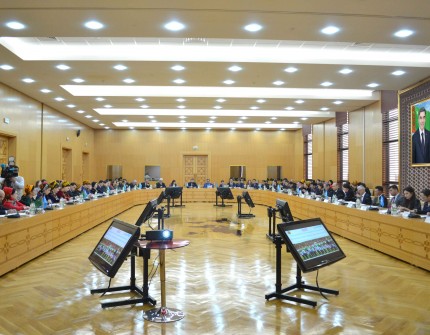 On November 20, 2019, a high-level event on the 30th anniversary of the Convention on the Rights of the Child was held at the Ministry of Foreign Affairs of Turkmenistan.

During their opening speeches, the Minister of Healthcare and Medical Industry of Turkmenistan, the Minister of Education of Turkmenistan and the UNICEF Representative in Turkmenistan, briefly following the history of the adoption of the Convention on the Rights of the Child (CRC), noted the importance of the 30th anniversary of CRC for the promotion of the Sustainable Development Goals. The inextricable link between the realization of children's rights and the implementation of the 2030 Agenda was noted.

During the event, statements about the experience of other countries since the adoption of the CRC, the role of public organizations and the media in promoting the rights of the child, the rights of the child and the principles of doing business in this direction, and corporate social responsibility of private business were presented. The young SDGs ambassadors presented statements on the topic: “The world we want for our children and youth.”

Also, during the event, video materials were shown in which festive events dedicated to the 30th anniversary of the CRC around the world were presented, as well as children in Turkmenistan talking about their dreams and aspirations in the future were shown.

At the end of the event, which was aimed at summing up the implementation of the CRC in Turkmenistan and around the world, as well as at supporting all of us expanding our efforts to realize the rights of the child everywhere, a question-and-answer session was held between UNICEF and the participants of the event.