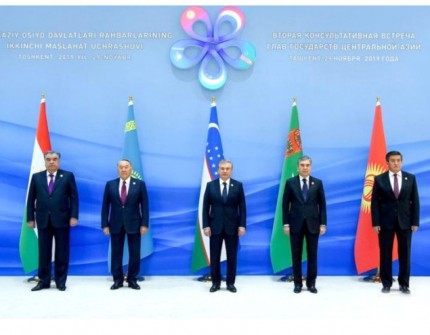 After the traditional photography ceremony, a five-sided summit in a narrow format began in the small conference room of the Kuksaroý Palace.

The agenda of the Summit included the expansion of regional cooperation in the political, trade-economic, investment, transport-communication, cultural-humanitarian and other fields, as well as the exchange of views on relevant aspects of international issues and regional security.

Speaking at the Consultative Meeting of the Heads of States of Central Asia, President Gurbanguly Berdimuhamedov emphasized the special importance of joint activities to support reconciliation processes in Afghanistan. The Turkmen leader expressed his conviction that there was no alternative to the negotiation process. All previous experience has shown that force methods were counterproductive and had no prospects.

The head of state reaffirmed the position of Turkmenistan, which has been repeatedly stated earlier: as a neutral state and closest neighbor, our country is ready to provide all the necessary conditions for organizing direct contacts between all parties interested in a peaceful, political settlement of the situation in Afghanistan.

It is necessary to establish in various international organizations, first of all, the UN and the OSCE, systemic mechanisms of five-way political consultations. In order for our delegations to have agreed positions on issues of truly important regional importance and purposefully uphold them, relying on mutual support and attracting like-minded people from other states, the head of state emphasized.

Partnership in the field of innovative development, high technology is today an extremely relevant topic of interaction. This is dictated by the course of modern global development, where innovation is synonymous with efficiency and competitiveness, President Gurbanguly Berdimuhamedov emphasized.

In order to give regional cooperation in the trade-economic, energy, transport and logistics, innovative directions a focused and systematic nature, the Turkmen leader invited the heads of Central Asian countries to think about creating a five-sided Business Council.

Such a structure could take over the functions of a think tank to form a joint strategy for the states of the region in priority areas of economic partnership, said President Gurbanguly Berdimuhamedov.

During his speech, President Gurbanguly Berdimuhamedov touched upon such a topical issue for the countries of the region as the conservation and use of water resources. In this regard, the importance of combining efforts on the principles of ensuring equal and equitable access to water resources was emphasized.

By encouraging wide humanitarian contacts and developing cultural ties, we ensure the continuity of the traditions of good neighborliness, mutual understanding and sympathy for our peoples, the Turkmen leader said. In this process, the creative intelligentsia of the countries of the region has a key role to play. It could take the initiative to launch a new format of dialogue, which can be called the Central Asian Cultural Dialogue Forum, the head of Turkmenistan said.

Following the results of the Consultative Meeting of the Heads of States of Central Asia, a Joint Statement was adopted.

On the same day, the heads of states took part in a joint ceremony of planting trees in the park of honored guests of the Kuksaroy State Residence, which became a kind of symbol of the inviolability of the bonds of friendship and good neighborliness connecting the peoples of the five countries.

In the afternoon, the heads of states proceeded to the memorial complex of the first President of the Republic of Uzbekistan Islam Karimov. In a festive atmosphere, the Presidents of the countries of Central Asia laid flowers at the foot of the monument to a prominent politician, paying tribute to and respectful memory to the outstanding statesman of Uzbekistan.

Upon completion of the working visit program, President of Turkmenistan Gurbanguly Berdimuhamedov proceeded to the Tashkent Islam Karimov International Airport, from where he left for his homeland.