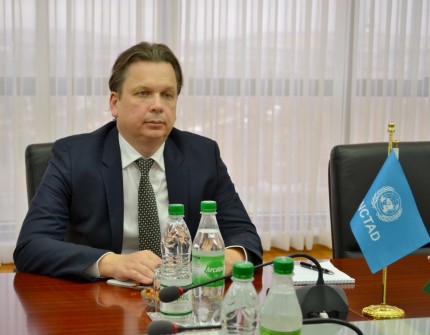 On January 13, 2020, the meeting with the Regional Coordinator for Central Asia of the United Nations Conference on Trade and Development Dmitry Godunov was held in the Ministry of Foreign Affairs of Turkmenistan.

During the meeting, the parties noted the vital role of the UNCTAD in the implementation of the Sustainable Development Agenda till 2030.

In his turn, the guest specifically noted the systematic approach of Turkmenistan to implementation of the tasks in the area of trade and development.

Also, during the talks, the parties made accent on three main vectors of cooperation of Turkmenistan with the UNCTAD, such as encouraging investments, modernizing the customs service, transport and logistics, as well as assistance to exploring the issues of entering the WTO.  The Turkmen side noted the effectiveness of the ASYCUDA system implemented by the UNCTAD.

In the end of the meeting, the parties considered the issue of Turkmenistan joining to the Council of the UNCTAD on trade and development, as well as exchanged views on widening collaboration on wide range of multilateral partnership.