Meeting through videoconferencing held in the MFA of Turkmenistan 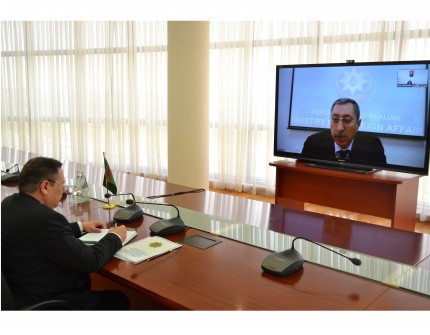 On May 7, 2020, a meeting took place in the MFA of Turkmenistan between the Director of the Caspian Sea Institute of Turkmenistan M.Atajanov and the Deputy Minister of Foreign Affairs of the Republic of Azerbaijan Kh.Khalafov. The session was held in the online format.

The various issues of cooperation between Turkmenistan and Azerbaijan in the area of resource usage and collaboration in the Caspian were discussed. The scientific-research and innovative-technological cooperation of two countries in the framework of prior agreements were also considered during the talks.

The parties specifically stated the importance of the First Caspian Economic Forum hosted by Turkmenistan in 2019 which became yet another confirmation of the Caspian states’ readiness to consolidate efforts in trade-economic, ecological and transport spheres.

The parties also underlined the significance of adoption by all the Caspian states of the Convention on the Legal Status of the Caspian Sea which serves as a fundamental legal frame for all-round cooperation on the Caspian in different sectors.