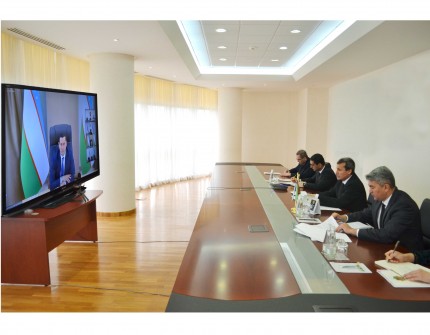 13, 2020, in the building of the Ministry of Foreign Affairs of Turkmenistan, a meeting was held between the Minister of Foreign Affairs of Turkmenistan R.Meredov and the Deputy Prime Minister, Minister of Investments and Foreign Trade of the Republic of Uzbekistan S.Umurzakov. The meeting was held in a video conference format.

During a constructive conversation, the parties noted the high level of interstate relations between Turkmenistan and Uzbekistan, based on the principles of traditional good neighborliness and mutual respect. In this direction, the parties confirmed the trusting relations of the two Presidents, which became the key to the successful development of multifaceted, Turkmen-Uzbek cooperation.

Discussing the progress in implementing the agreements reached earlier, the interlocutors particularly noted the need to expand cooperation between the parties in the trade-economic, transport and logistics sectors in order to comprehensively support freight flows between the countries of the region at a given time difficult for the world community. In this context, the issue of expanding the interaction of the parties in the framework of the Intergovernmental Commission on trade-economic, scientific-technical and cultural cooperation was particularly noted.

An exchange of views also took place on pressing issues of bilateral cooperation in the fields of agriculture, healthcare, education and others.