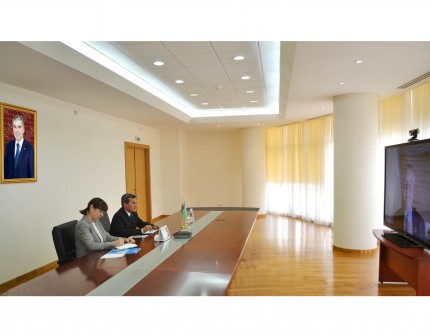 On June 26, 2020, Deputy Chairman of the Cabinet of Ministers, Minister of Foreign Affairs of Turkmenistan R.Meredov held a video conference with the Special Adviser to the UN Secretary General on Reforms, Mr. Jens Wandel.

During the meeting, the parties discussed key vectors of cooperation between Turkmenistan and the UN and its specialized structures. In particular, joint actions to counteract the coronavirus pandemic and its socio-economic consequences were discussed. The importance of the solidarity of the countries of the world in the fight against a pandemic was noted.

The steps taken in Turkmenistan to prevent dangerous diseases were announced, including the activities of the Emergency Commission to Combat the Spread of Diseases, the implementation of the Turkmenistan Preparedness and Response Plan for Acute Infectious Disease, and the country's accession to the Platform for Access to Technologies against COVID-19 (C-TAP), as announced by the Director-General of WHO.

Also discussed were issues of expanding and supporting the material and technical support system for measures to combat the pandemic. It was noted that Turkmenistan strongly supports international efforts aimed at protecting human health.

The parties also discussed ongoing projects and programs between Turkmenistan and the UN, and also considered promising areas of cooperation in the future.