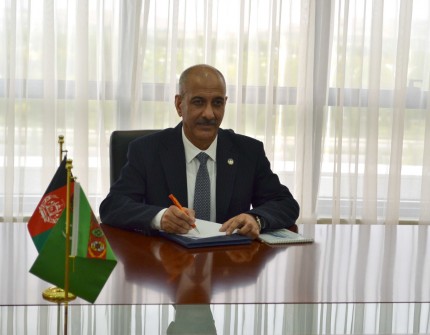 The parties highly appraised the level of interstate dialogue based on the principles of good-neighborliness, mutual respect and openness. They reiterated that under the leadership of the Presidents of Turkmenistan and Afghanistan, the countries are adhered to the development of bilateral ties on the whole spectrum of cooperation. The positive results of collaboration in the political-diplomatic, trade-economic and cultural-humanitarian spheres were noted.

The diplomats touched upon the international issues and the necessity of strengthening the international cooperation, taking into accounts the international norms and principles. In this regard, the efficiency of mutual support of the initiatives in the framework of the United Nations was underlined. Stressing the firm standpoint of the Turkmen side on the advancement of Afghan peace talks, Ambassador expressed gratitude to the Government of Turkmenistan and MFA of the country for assistance in the implementation of his diplomatic activities. Appreciation for multifaceted support of the afghan people was also expressed.

The Ambassador underlined the significance of joint projects, including the construction of the Turkmenistan-Afghanistan-Pakistan-India (TAPI) gas pipeline, power and fiber-optic communication line Turkmenistan-Afghanistan-Pakistan (TAP) which are expected to make a valuable input into the overall development of Afghanistan and the region in general. In this regard, the recent signing ceremony of important documents held in the city of Kabul in participation of the President of the Islamic Republic of Afghanistan Mohammad Ashraf Ghani was referred to.

During the meeting, the parties also discussed the opportunities of expanding cooperation in the cultural-humanitarian vector.

In the end of the meeting, the Turkmen side noted the vital input of Mr.Najibullah Alikhil in the development of Turkmen-Afghan ties and wished him health and success.