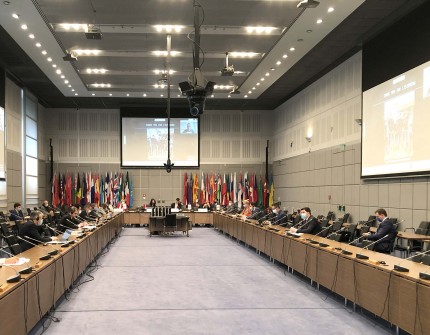 On October 23, 2020, at a regular meeting of the Security Committee of the OSCE, the delegation of Turkmenistan made a statement on the "Strategy of Turkmenistan in the field of security based on the principles of neutrality" on the occasion of the 25th anniversary of the Permanent Neutrality of Turkmenistan.

In particular, the statement notes that on December 12 this year, Turkmenistan, together with the international community, celebrates the 25th anniversary of the international recognition of Turkmenistan as a permanently neutral state, which is an important event in the history of the country and has determined the basis of its foreign policy.

The delegation also informed that Turkmenistan has established close cooperation with the relevant UN institutions, including the UN Regional Center for Preventive Diplomacy for Central Asia, in order to implement the country's strategic initiatives against modern threats. In this context, it was noted that in December 2019, the National Strategy to Prevent Violent Extremism and Counter Terrorism for 2020-2024 and the National Action Plan to Combat Trafficking in Human Beings 2020-2022 were adopted.

The statement also emphasizes that Turkmenistan adheres to the principles of neutrality and is a strong supporter of settling any disputes by peaceful and political means. In this regard, the Government of Turkmenistan continues to develop cooperation with the relevant UN institutions, EU, OSCE, CIS and other international organizations, and the world community as a whole, being fully committed to international efforts to address security issues.

In this regard, it was underlined that at the 74th session of the UN General Assembly in September 2019, on the initiative of the President of Turkmenistan Gurbanguly Berdimuhamedov, a resolution declaring “The year 2021 as The International Year of Peace and Trust” was adopted.