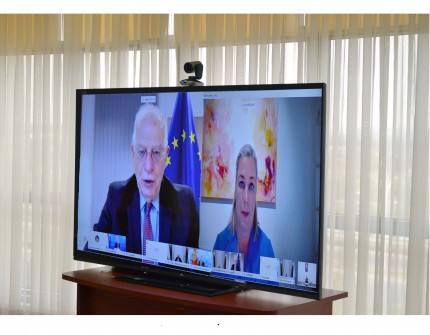 At the Ministerial Meeting of the European Union and Central Asian countries, the Turkmen side urged the participants to pay due attention to the climate change issues.

In this context, the delegation of Turkmenistan noted that each country taking part in the “Central Asia – European Union” format should spend utmost efforts to fulfill the provisions of the Paris Agreement.

In this regard, the determination of Turkmenistan to declare at the Climate Ambition Summit to take place on the 12th of December its commitments related to the implementation of the Paris Agreement on the national level was stated.

The determination of Turkmenistan to achieve a zero level emission of greenhouse gases was shown as one of the main elements of the complex of national efforts in this regard.

Besides it was stated that in the nearest future, the Law of Turkmenistan “On Renewable Sources of Energy” and the National Strategy on the Development of Renewable Energy are envisioned to be adopted which is aimed at contributing to gradual growth of the renewable energy portion within the energy sector of the country.

The large-scale national campaign on planting trees in the framework of which more than 90 million seedlings were planted in the country in the last 20 years was especially noted.  It was stated that the quantity of planted trees will reach 25 million in present year.