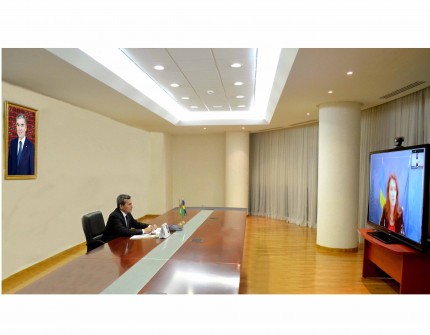 During the constructive conversation, the diplomats discussed a wide range of bilateral issues, exchanged views on the regional and international agenda.

Also, the heads of the Foreign Ministries of the two countries expressed mutual interest in intensifying contacts in the political-diplomatic, trade-economic and cultural-humanitarian fields, as well as within the framework of the new European Union Strategy for Central Asia, where there is a promising potential for joint implementation.

During the conversation, the parties also focused on the need to intensify cooperation between the two countries through regional and international structures, in particular the UN and the OSCE.

During the meeting, the Ministers also discussed the prospects for cooperation between the two countries during Sweden’s chairmanship in the OSCE in 2021.

The commitment of the Turkmen side was expressed to establish a wide range of dialogue in all areas of mutual interest. In this aspect, they also noted the importance of the joint efforts of the two countries in the context of comprehensive counteraction against the current pandemic situation.

The issues of expanding ties between the parties in the field of the rule of law, gender equality, human rights, education and science, including in the field of high technologies and innovations, were also considered.