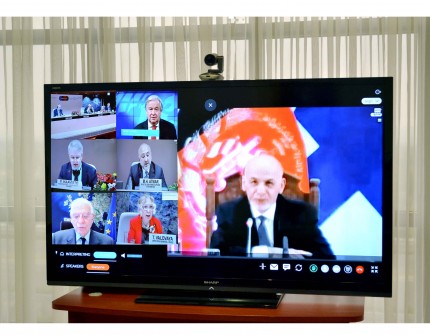 During the plenary session of the High Level Conference on Afghanistan, the parties discussed issues of economic cooperation.

Speaking at the event, President of the Islamic Republic of Afghanistan Mohammad Ashraf Ghani spoke about the economic situation in the country. Expressing gratitude for the aspiration of the world community to facilitate the involvement of Afghanistan in the world economy, he especially noted the important contribution of Turkmenistan. Projects initiated by the Turkmen side were highlighted, in particular, the importance for Afghanistan of the construction of power transmission lines and fiber-optic communication along the Turkmenistan-Afghanistan-Pakistan (TAP) route.

In turn, Deputy Chairman of the Cabinet of Ministers, Minister of Foreign Affairs of Turkmenistan R. Meredov spoke in detail about trade and economic cooperation with neighboring Afghanistan.

He stressed that the leadership of Turkmenistan considers the regional economic integration of Afghanistan through the implementation of large-scale infrastructure projects as one of the main aspects of restoring peace in this country.

Thus, Turkmenistan has initiated a number of important economic projects with the participation of Afghanistan. The construction of the TAPI gas pipeline, electricity and communication lines along the TAP route, as well as railways connecting Turkmenistan with Afghanistan and other countries of the region continues.

The head of the Foreign Ministry of Turkmenistan informed the meeting participants about the financial component of these projects. Turkmenistan has allocated 1 billion 250 million US dollars for the implementation of projects with the participation of Afghanistan.

During the meeting, the parties discussed the issues of attracting investments and the structure of financing in the process of comprehensive reconstruction of Afghanistan.