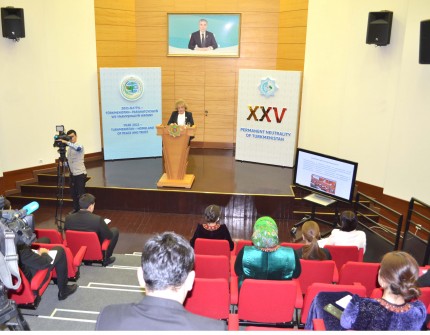 On January 8, 2021, a briefing was held in premises of the Ministry of Foreign Affairs of Turkmenistan by the Head of the OSCE Center in Ashgabat Ms. Natalia Drozd.  The main topic was the Ashgabat Final document, adopted on the outcomes of the International Conference "Policy of neutrality and Its Importance in Ensuring International Peace, Security and Sustainable Development" held on December 12 of last year in honor of the 25th anniversary of Turkmenistan's permanent neutrality. As known, this Document was circulated as the documents of the 75th session of the UN General Assembly and the UN Security Council.

The event was attended by Turkmen diplomats and faculty members of the Institute of International Relations of the Ministry of Foreign Affairs of Turkmenistan.

In the beginning of her speech, N.Drozd noted that the last year marked by the 25th anniversary of the international recognition of the status of permanent neutrality of Turkmenistan was filled with important events.

She emphasized the significance of political, economic and humanitarian aspects of the policy of neutrality in strengthening the regional and global security and stability. In this context, Ms. Drozd highlighted the importance of the Ashgabat Final Document, which urges to develop the concept of neutrality and promoting the role of neutralism in international efforts to maintain peace and mutual understanding.

“It should be noted specifically that the Ashgabat Document welcomes the establishment of the Group of Friends of Neutrality for the sake of peace, security and sustainable development. This initiative of the Government of Turkmenistan is of particular importance, since the Group will serve as an effective platform for maintaining equal dialogue on applying the potential of neutrality in order to improve international political cooperation”, N. Drozd noted. She also expressed confidence that this Document will serve as a guideline for further joint activities.

During the briefing, the Head of the OSCE Center in Ashgabat also emphasized the importance of the UN General Assembly Resolution declaring the year 2021 as the International Year of Peace and Confidence. “By initiating this Resolution, Turkmenistan reaffirmed its commitment to the use of neutrality to facilitate global efforts to promote peace and security. The resolution acquires special significance in the light of modern threats to global security”, N.Drozd added.