State visit of President of Turkmenistan to the Republic of Kazakhstan 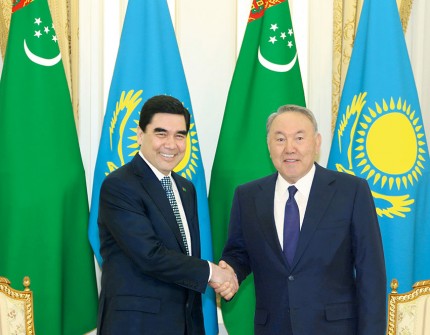 The Akorda Palace of the President of the Republic of Kazakhstan hosted official reception ceremony of President Gurbanguly Berdimuhamedov who arrived in Astana on the state visit. The Heads of Kazakhstan and Turkmenistan introduced members of the official delegations of their countries to each other, received the report of the Head of the Guard of Honor and paid tribute to the State Flag of Kazakhstan. After, the Heads of the states walked along the line of the Guards of Honor.

After official reception ceremony, President Nursultan Nazarbayev and President Gurbanguly Berdimuhamedov went to the Gold Hall of the Akorda Palace for high-level talks in one-to-one format.

Then the talks continued in an extended format with the participation of the government delegations of the two countries.

Speaking at the talks in the extended composition of the delegations, the President of Turkmenistan stressed that Turkmenistan and Kazakhstan have a common vision for preserving and maintaining universal peace and stability, countering the threats of international terrorism, extremism, and on the peaceful settlement of the situation in Afghanistan.

Gurbanguly Berdimuhamedov made special mention that both states stand for further consolidation and improvement of the activity of the International Fund for Saving the Aral Sea, which is an important regional structure aimed at provision of cooperation in improvement of ecological, social and economic situation in the Aral Sea Region. President highlighted that Turkmenistan, being chairing country in the Fund, developed relative Concept reflecting priority plans of joint activity of the member states. The Head of the State expressed the hope for close cooperation with Kazakhstan for efficient and specific work of the Fund.

President Gurbanguly Berdimuhamedov, speaking during the Turkmen-Kazakh talks in extended format, considers cooperation in the transport sphere as a key factor in the successful economic development of Turkmenistan and Kazakhstan as well as their integration in the system of global relations. The Turkmen leader focused on a bright result of cooperation in the transport sphere – the construction of the Kazakhstan-Turkmenistan-Iran railway. According to President of Turkmenistan, the railway will bring the trade and economic cooperation between Central Asian countries and neighboring regions up to a qualitatively new level and offer a powerful incentive to interregional relations on a long-term basis.

President of Turkmenistan invited President Nursultan Nazarbayev to participate in the ceremonial opening of V Asian Indoor and Martial Arts Games on September 17 of this year in Ashgabat.

The heads of state consolidated their signatures with the Joint Statement, the Treaty on Strategic Cooperation between Turkmenistan and the Republic of Kazakhstan, the Agreement on Demarcation at the Turkmen-Kazakh State Border.

After the completion of the Turkmen- Kazakhstan talks at the highest level and the signing ceremony, the leaders of the two countries addressed the representatives of the media.

During the talks, the commonality of the approaches of the two countries on such key issues of the global agenda as preserving and maintaining universal peace and stability, countering the threats of international terrorism, extremism and drug trafficking was emphasized. The close cooperation of Turkmenistan and Kazakhstan in the framework of pentagonal cooperation in the Caspian Sea will also continue. The strategic vectors of bilateral cooperation are energy and transport. Turkmenistan and Kazakhstan occupy leading positions on the continent in terms of energy production. We have a modern infrastructure, share a common vision of the configuration of energy and transport flows in Europe and Central Asia. An agreement was reached on further expansion of cultural, humanitarian, scientific, educational and sport ties between the two states.

In honor of the eminent Turkmen guest, the President of the Republic of Kazakhstan has given an official dinner at the “Akorda” Palace, at which the heads of two states exchanged speeches.

At the reception, the Kazakh leader recognized the outstanding contribution of President Gurbanguly Berdimuhamedov to developing the friendly, good neighborly interstate relations, strengthening the long-standing brotherly ties between the two peoples, ensuring universal peace and concord, promoting fruitful international cooperation, and announced the decision to decorate the head of Turkmenistan with the State Award of the Republic of Kazakhstan – the Order of “Dostyk”, Order of Friendship, (First Class).

To applause of the event participants President Nursultan Nazarbayev presented his Turkmen counterpart with the top and honorary award.

Deeply grateful to the head of Kazakhstan for the honor, President Gurbanguly Berdimuhamedov noted that he considers the fact as a remarkable testament to yet closer relations of friendship and fraternity between the two countries and high assessment of Turkmenistan’s peaceful neutral foreign policy, and as the award given to the whole Turkmen nation.

The state visit of the President of Turkmenistan to the Republic of Kazakhstan continues.