Round table "Turkmenistan-Russia: 25 Years   of Diplomatic Relations" held in Moscow 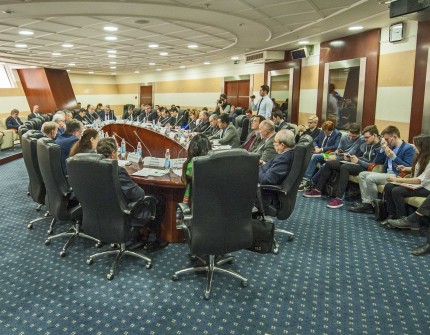 A round table meeting dedicated to the 25th anniversary of the establishment of diplomatic relations between Turkmenistan and Russia was held in Moscow.

The event, organized jointly by the Embassy of Turkmenistan in the Russian Federation and the Moscow State Institute of International Relations (University), was attended by leaders and representatives of the Turkmen and Russian ministries of foreign affairs, foreign diplomatic corps accredited in Moscow, prominent oriental scholars, Turkmen and Russian students studying In Moscow universities. Among those present was the native of Turkmenistan, the owner of the Order of Turkmenistan "Star of the President", Hero of Russia cosmonaut Oleg Kononenko.

Opening the meeting, the rector of MGIMO (U) A.Torkunov noted the importance of this significant date, which initiated a new stage in the history of relations between the two independent states. Noting the successes of Turkmenistan in all spheres of state building, the rector of the Moscow State Institute of International Relations spoke in particular for the activation of contacts between scientific and educational centers, academic circles of the two countries, and noted the existence of large reserves in the matter of humanitarian cooperation.

Ambassador of Turkmenistan to Russia B.Niyazliev noted the strategic nature of the Turkmen-Russian partnership, which was confirmed during the visit of President of Turkmenistan Gurbanguly Berdimuhamedov to Russia last November and his talks with President Vladimir Putin.

Director of the 3rd CIS Department of the Ministry of Foreign Affairs of the Russian Federation A.Sternik in his speech noted the proximity of the positions of Turkmenistan and Russia on regional and international issues, which allows the two countries to fruitfully cooperate within authoritative international organizations.

The Ambassador on special assignments of the Ministry of Foreign Affairs of Turkmenistan G.Kasymov, who arrived at the round table, delivered a report on the course of bilateral cooperation and its prospects. Noting the great potential of the partnership, the Turkmen diplomat stressed its effectiveness and compliance with long-term mutual interests for the sake of peace, security and sustainable development.

Vice-rector of the Institute of International Relations of the Ministry of Foreign Affairs of Turkmenistan D. Gurbangeldiev focused on the interaction of the two countries in the scientific and educational sphere, which is the priority vector of humanitarian cooperation.

"Turkmenistan is my Motherland, where I was born and raised. In all three flights to space, I took Turkmen souvenirs with me, which reminded me of this beautiful land, "said cosmonaut O.Kononenko addressing the audience. He also noted the outstanding role of the President of Turkmenistan in the development of the space industry in the country, in particular, his decision to establish the National Space Agency in Turkmenistan. Having stated the existence of a great potential for cooperation in this sphere, O. Kononenko made a proposal on the implementation of joint scientific space programs.

The meeting was also attended by Russian experts, analysts, teachers of MGIMO. A photo exhibition dedicated to the history and modern development of Turkmenistan was organized within the framework of the round table.