The fourth section of the International Forum "Cultural and historical relations of the Turkmen and Indian people: ancient roots and modern perspectives" 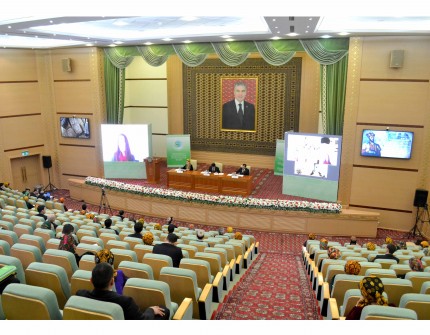 On March 31, 2021, the section session titled "Cultural and historical relations of the Turkmen and Indian people: ancient roots and modern prospects" was held within the framework of the International Forum on  "Muhammad Bayram Khan – the Turkmen and the traditions of humanism, patriotism and courage of Turkmen people " in the International University for the Humanities and Development.

The representatives of the academia from different countries of the world and the region, including India, England, Turkey, Russia, Kazakhstan, Tajikistan and Uzbekistan have attended the session.

The director of the Scientific Center for the Civilization of Eastern States of the Humanitarian Institute of Khujand State University of Tajikistan named after B. Gafurov, Zamira Gaforova noted that “Bayram Khan's skill in using artistic means, figuratively seeing and reflecting the surrounding reality confirms the value of the poet's work as an important source for studying poetics, rhetoric, and medieval literature. Therefore, we consider it appropriate to study in detail not only the life and work of Bayram khan in literature classes, but also the artistic features of his work”.

The speakers underlined that Turkmenistan and India have ancient traditions and a rich historical heritage. Close friendly relations between the two countries in the field of culture and science were also underlined.

This forum not only significantly expanded knowledge and ideas about the life and work, Bayram Khan’s identity, but also made a significant contribution to the deepening of international scientific and cultural relations according to the participants.