Meeting with the Minister of Foreign Affairs of Kyrgyzstan 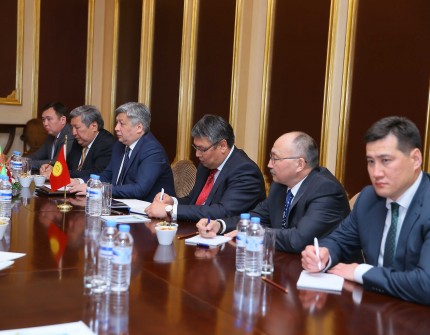 During the meeting, the parties discussed the state and prospects for the development of political cooperation. In this context, the parties noted the role of visits at high levels. Among the priority areas of cooperation there were discussed issues of cooperation within the framework of international organizations, primarily the UN. It was also noted the importance of regular political consultations between the foreign ministries of the two countries for further improvement and expansion of the dialogue on a mutually beneficial basis.

Speaking about trade and economic cooperation, the parties discussed the opportunities for activating joint contacts, taking into account the conclusion of relations in this direction to a qualitatively new level. Also, the possibilities of developing relations between the business communities of the two countries were discussed, by organizing joint round tables and business forums.

At the end of the meeting, the parties noted the need to bring bilateral ties to a higher level, which meets the long-term interests of countries.