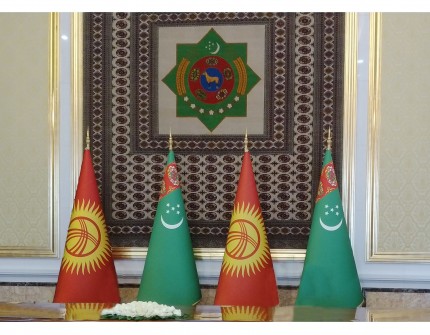 The letter expresses gratitude to the Turkmen side Turkmen side for organizing at a high level the recent official visit of the Head of Kyrgyzstan to Ashgabat.

The message notes: ‘’All the events held in the framework of the visit, especially bilateral meetings were held in the constructive and trustworthy atmosphere, thus becoming one of the historical stages in the development of the Kyrgyz-Turkmen fraternal relations. I am very glad that some of the agreements reached during the visit have already being realized.

I am sure that fraternal relations and strategic partnership between the Republic of Kyrgyzstan and Turkmenistan will further continue to expand and deepen for the benefit of the two peoples’’.

As is known, Turkmen-Kyrgyz relations, which have a strategic character, dynamically develop within a wide range of spheres. A fruitful cooperation which serves for the mutual benefit of two friendly nations, actively develop in the spheres of trade and economy, education, culture and sport. Regular contacts established between the Ministries of Foreign Affairs of the two states contribute to the increase the potential of political-diplomatic interaction.

At the site of the Turkmen-Kyrgyz Economic Forum, held within the framework of the visit of the President Sadyr Zhaparov to Turkmenistan, representatives of the business circles of the two countries signed about 20 contracts for the supply of various products and domestic production to Kyrgyzstan.

Reached on the intergovernmental level agreements contribute to the comprehensive expansion of relations between Turkmenistan and Kyrgyzstan in the spheres of transport, transport infrastructure, energy, agriculture, realization of the investment projects and etc.

So, in order to implement the agreements reached at the top, the first batch of cargo was sent from Ashgabat to Bishkek, consisting of sanitary equipment, products of light industry and petrochemical products, confectionary, as well as vegetables produced in Turkmenistan.

Activation of bilateral relations in all the spheres of mutual interest, including the beginning of realization of signed contracts once again confirms the long term and strategic character of Turkmen-Kyrgyz cooperation.