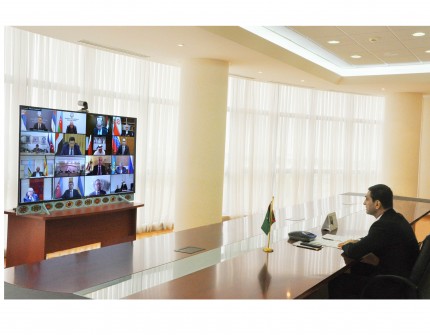 During the period of 13-14 July 2021, the Mid-term Ministerial Conference of the Non-Aligned Movement (NAM) took place through videoconferencing.  Turkmenistan at the session was represented by the Deputy Minister of Foreign Affairs of Turkmenistan Vepa Hajiyev.

This representative Conference has united the heads of external policy agencies of tens of world countries standing for the advancement of the goals of the Non-Aligned Movement. At the opening of the session, the participants listened to the video statement of the President of the Republic of Azerbaijan Ilham Aliyev.

After that, the general debate on the topic “Non-Aligned Movement at the center of multilateral efforts in responding to global challenges” has also started.

Speaking at the Conference, the Deputy Minister of Foreign Affairs of Turkmenistan noted the importance and timeliness of the session. He drew attention to the statement of the President of Turkmenistan Gurbanguly Berdimuhamedov during the 18th Summit of the Non-Aligned Movement in May 2020 where the vision of the Turkmen side was reflected on how the NAM Member States can advance cooperation for the sake of peace, security and sustainable development.

In this respect, the initiatives of Turkmenistan on key issues of the international agenda were voiced, including the struggle with the pandemic, climate change and financing the process of attaining the Sustainable Development Goals.

Deputy Minister of Foreign Affairs of Turkmenistan called for active participation of the countries in the International Forum of Medical Scientists, which the Turkmen side aims to convene jointly with the WHO in autumn of current year for the development of cooperation on equal access to healthcare services and vaccination.

The significance of ensuring sustainable transport in emergencies was also stated that is reflected in the draft resolution presented by the Turkmen side, which is being considered by the 75th session of the UN General Assembly.

Speaking about the problems related to climate change, the Deputy Foreign Minister of Turkmenistan drew the attention to the initiative of the President of Turkmenistan on working out a UN Strategy aimed at the implementation of measures for the development of low carbon energy and preparation of an International Roadmap under the UN auspices on the development of hydrogen as one of the priorities in the field of alternative energy.

Also, the intention of the Turkmen side to convene the International Conference on Financing for Development was voiced.

Upon the outcomes of the Mid-term Ministerial Conference of the Non-Aligned Movement (NAM), the Declaration of the Conference participants was adopted.